Iran Protests, Breaks Out Across The County
Iran Protests November 2019
National Council of Resistance of Iran
The Viable Democratic Alternative 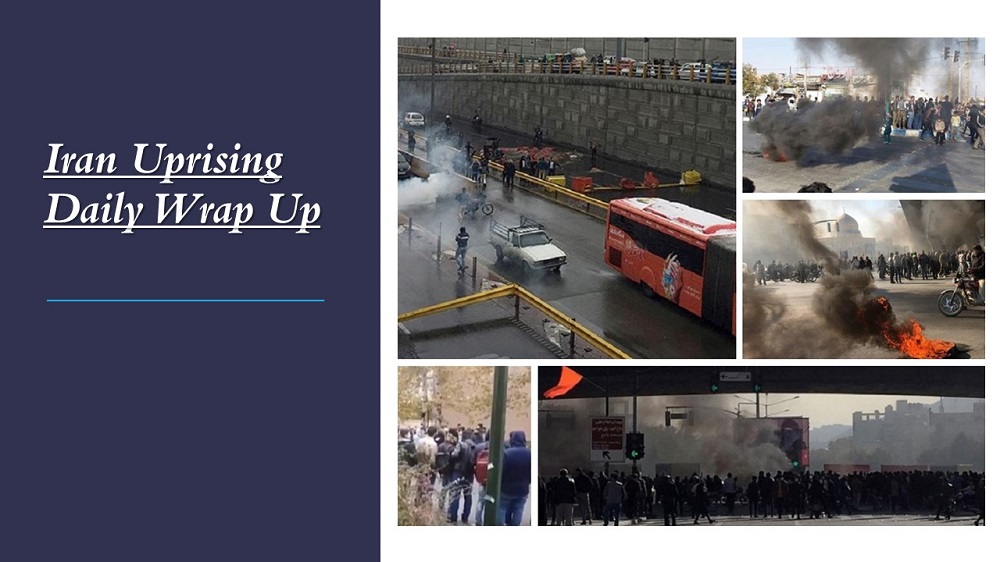 November 22, 2019
In the 8th day of nationwide protests we provide you with a concise wrap up of the most important events and dynamics of the Iran Uprisings below:

Anti-regime #IranProtests have taken place in 165 cities across the country with at least 251 killed, over 3,700 people injured and more than 7,000 demonstrators arrested by the regime’s oppressive security forces.#IranRegimeChange #FreeIran https://t.co/2ALZy2Qeka

o On Thursday night, young insurgent protesters Isfahan province’s Shahin Shahr, Zarin Shahr and Najaf-Abad, created roadblocks and skirmished with state security forces.
o A report provided by the MEK network In Nasimshahr near Tehran indicates many fires are burning across town on Thursday, November 21. Banks and administrative offices were torched by protesters. Authorities dispatched security offices in response and all signs indicate people are no longer tolerating or intimidated by the mullahs’ regime.
o Iran’s various top regime officials are parading on state TV announcing harsh reprisals in a bid to bring the population under control:
 Ali Shamkhani, secretary of the Supreme National Security Council, told the Mehr News Agency that the MEK was responsible for the unrest and that “every single rioter, wherever they might be in Iran, will be identified and punished for their acts.”
• Internet status in Iran
o The cost of the Iranian regime’s near-total internet shutdown
 Analysts have estimated that the Iranian regime’s near-total internet shutdown has cost Iranian people nearly $400 million US Dollars a day, outpacing the perceived economic benefits that the regime hoped to reap from taxing the poor for fuel purchases, causing much mockery among the population
 There is another hidden cost to the shutdown as the international community uniformly condemned the regime’s move as a violation of the people’s right to freely access information and their right to free speech
 Ironically, Hassan Rouhani attempted to minimize the extensive protests by calling the protesters a few hooligans. A cynical remark that does not correspond with the shutdown of the Internet to 80 million Iranians.
o Netblocks reports that after 136 hours of after Iran implemented a near-total internet shutdown, connectivity has returned to only 15% of normal levels

Update: 136 hours after #Iran implemented a near-total internet shutdown, connectivity to the world remains low at 15% of normal levels📉

o Iranians are highly resentful that under Iran’s corrupt regime, many state-owned enterprises — including those affiliated with Ali Khamenei, Iran’s supreme leader, and the Revolutionary Guard Corps, a powerful security branch, and the government’s cronies — are exempt from paying taxes. That is why centers of financial plunder, such as banks and investment funds run by these entities, and businesses owned by the IRGC have been attacked.

• International Commentary on the Iran Protests

o Major news organizations and world media, after initial hesitance and silence, have begun reporting that the Iranian regime’s official line that it has successfully quelled isolated protests does not add up. The New York Times summed it up as, “protesters became more brazen, suggesting a new phase in the dynamic of resistance and repression.”
 “Iran Declares Protests Are Over, but the Evidence Suggests Otherwise,” November 21, 2019, The New York Times
 “In Iran, ‘rage is escalating’ as economic stress reaches a new level,” November 22, 2019, The Washington Post
 “Iran’s leadership faces its biggest test of survival,” November 18, 2019, Politico
 “Why Iranians Are Setting Their Own Banks on Fire,” November 19, 2019, Politico
 “Towards A Bipartisan Iran Protest Policy Playbook,” November 21, 2019, Radio Farda