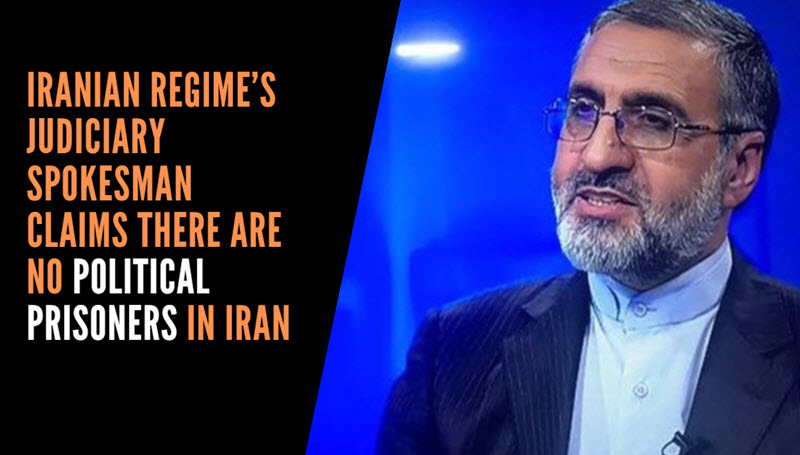 He told the state-run Ofogh TV on June 30, 2019: “Those who sometimes claim (to be political prisoners) are those who have committed crimes against security.”

“Regretfully, today some inside the country describe people affiliated to the MEK, the strongest terrorist organization in the country and perhaps the world, ... as political prisoners," Esmaili added.

Prior to this, both former Judiciary Chief Sadeq Amoli Larijani and Foreign Minister Mohammad Javad Zarif have denied that Iran has political prisoners.

Not only was Esmaili lying about the presence of political prisoners in Iran, but he was also trying to cover up the regime’s responsibility for the death of 21-year-old Alireza Shir-Mohammad-Ali, who was stabbed to death by two prisoners on June 10.

Shir-Mohammad-Ali was sentenced to eight years of prison on the security charges of “blasphemy,” “insulting the founder of the Islamic Republic,” “insulting the leader” and “spreading propaganda” against the regime.

At the time of his death, he was on hunger strike to protest prison conditions. His mother and his cellmate believe prison officials had him killed.

Since then, another young political prisoner has died under suspicious circumstances in Ahvaz, south-western Iran.

Benyamin Alboghbiesh, 28, died after less than a month in custody. His body has not been returned to his family, even though they were informed of his death on June 26.

Philip Luther, Research and Advocacy Director for the Middle East and North Africa at Amnesty International, said: “Benyamin Alboghbiesh was a healthy young adult when he was arrested. His alarming death just over a month later raises serious concerns about his treatment and conditions of detention, including the possible use of torture. The Iranian authorities must immediately order an effective and impartial investigation into his death, including an independent autopsy.”