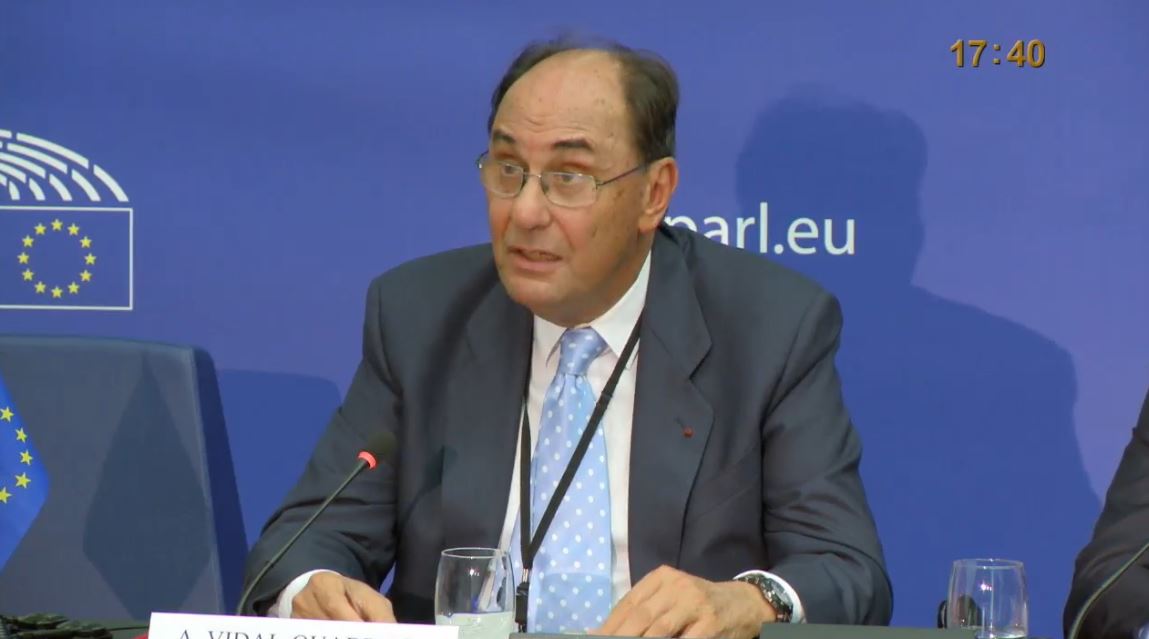 Written by Alejo VidalQuadras on 25 October 2019.

A new balance between the Iranian regime and the international community, particularly Europe, formed following the trip to New York by the regime's President Hassan Rouhani. The three EU powers held the Iranian regime responsible for the attack against the Saudi Aramco oil installations and emphasized: “It is clear to us that Iran bears responsibility for this attack.

There is no other plausible explanation.” Yet most importantly, as The Guardian published on September 27, the European Union has privately warned Iran that it will be forced to start withdrawing from the nuclear deal in November if Tehran goes ahead with its threat to take new steps away from the deal. The European troika also emphasized that the Iranian regime must stop its process of breaching its commitments under the terms of the 2015 Iran nuclear deal with world powers, as well as its missile and nuclear programs and its interference in the Middle East.

This was even though, previously, the EU and particularly France, tried to keep the nuclear deal intact. This is the best indicator of the failure of the Iranian regime’s policy, which started a year ago. This failed policy began in June 2018 with the foiled bombing plot at the grand gathering of the People’s Mojahedin Organization of Iran (PMOI, Mujahedin-e Khalq or MEK) and the Iranian Resistance near Paris. It continued with the regime planting mines on the coast of Fujairah in June 2019, bombing a Japanese tanker in June simultaneous with a meeting by the Japanese Prime Minister with the regime’s Supreme Leader Ali Khamenei in Tehran, a missile attack on an American drone on June 20, the seizing of a British vessel in the Strait of Hormuz in July and finally the regime’s missile attack against the huge oil and gas installation on Saudi soil, which constituted an act of war.

The reason for the EU’s change of position is mainly the regime’s attack on Saudi oil installations. The French president Emmanuel Macron called the September 14 attack on Saudi Arabia’s oil facilities "a game-changer, clearly” and today we face the threat of a serious confrontation for a miscalculation or an inappropriate response

Khamenei tacitly referred to the terrorist operations in Fujairah, Saudi Arabia, and Iraq and explained on May 29 that “if the levers and tools are properly used, American pressure will be decreased or stopped. But if we are tricked into the Americans’ ‘call to negotiations’ and the levers of pressure are not used, our loss is certain.” Khamenei, with regards to increasing uranium stockpiling and breaching enrichment levels, threatened that “we won’t stop at this stage, and in the next step, if necessary, we will use other levers of pressure.” By more pressure levers, he meant the terrorist acts the regime performs due to its economic suffocation and political isolation.

What are the reasons for the failure of the regime’s terrorist acts?

Regarding the failure of this policy, there are three major elements.

The regime’s weak and fragile situation, economic suffocation, intense regional and international political isolation and its reflection inside the regime, as we witness daily and with the upcoming elections increasing the regime’s infightings even more.

blackmailing. This includes the regime’s various terrorist acts on European soil and other countries, crimes and warmongering in Iraq, Afghanistan, Lebanon, Syria and elsewhere. Since a policy of firmness was adopted, the regime’s outlaw activities started to have a significant cost for their perpetrators.

The third and the most key factor, the element that intensifies and guides the other two factors, is the Resistance. Particularly, on the one hand, the uprising in 2018 and, on the other, the preeminent position of the MEK as the organizer and guide of the popular protests, are determining factors in exposing the regime’s weakness and vulnerability and have an effective role in directing the policy of world powers. The regime’s authorities constantly whine about this situation.

#Iran's Regime Fears the Organized Opposition #PMOI/#MEK
Given the fragile state of society in Iran, the days of the ruling mullahs are numbered, argues Iranian dissident Hassan Mahmoudi in an op-ed for Tsarizm. This reality forces the barbaric regime...https://t.co/qYmrmO7pfq pic.twitter.com/PuxAW0Mmmf

What path will the regime choose after the failure of this policy? What are its next steps?

The regime has demonstrated, due to its weakness, that it is unable to make a strategic decision on the dilemma of surrender or continuing its old path, because this is a choice between death or suicide out of fear of death. Therefore, it will persist along the path it has so far followed, which is taking contradictory political positions, yet practically continuing its terrorist and malign activities in the region and maybe aim for bigger targets, even though these actions won’t resolve its numerous crises. As General Jack Keane, former Vice Chief of Staff of the United States Army said, the U.S. will be under pressure to show a military response, particularly as the coalition against the regime enlarges day by day. This is a situation that Rouhani described in his speech as “being on the edge of downfall.” The Iranian theocracy is indeed every day closer to the abyss that will engulf it.