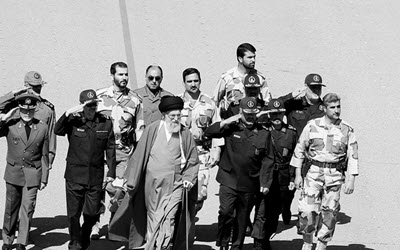 NCRI – Iranian Supreme Leader Ali Khamenei revealed his concerns over the upcoming presidential election and the possibility of “insecurity and sedition.”

“National security and the country’s tranquility is important, and the honorable candidates must be careful not to instigate geographical, lingual and ethnic divisions and not play in the hands of the enemy. If anyone seeks to take measures against the country’s security, they will most definitely receive a slap in the face,” he said at a gathering of Revolutionary Guards graduates in Tehran on Wednesday.

“If people break the law and gain hope through the enemy’s words, the elections will be against our interests,” the Supreme Leader emphasized.
Khamenei also referred to the issue of “confronting” protests and relating this subject to the 2009 presidential election.
“The country’s security must remain untouched,” he added.

Khamenei’s remarks were made a time when the Iranian regime’s internal disputes have escalated to an unprecedented scale on the verge of the May 19th polls. Signs indicate widespread public dissent and neglect regarding the farce election.

In the past few weeks the supporters’ network of the Iranian opposition People’s Mojahedin Organization of Iran (PMOI/MEK) in various cities across Iran have called for boycotting the election under the banner of “My Vote: Overthrow”.