A Look at the Statistics Behind Iran’s Election 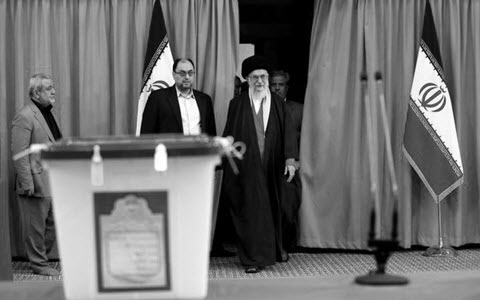 NCRI – Election rigging industry in the religious fascism ruling Iran, is one of the longest-serving industries of the regime.

One of the simplest and easiest way is multiplying the real votes of the candidates by a factor so that the number of participants in the elections can be shown as several times higher than the real figures.

One of the other ways to cheat, is printing additional ballots and producing fraudulent ballots in secret sites and inserting those ballot boxes into counting centers so that the number of participants is shown higher at the polls.

Perhaps the most telling example was given by the former Prime Minister (Mohammad Hossein Mousavi) in 2009 who said the Interior Ministry had used 22 to 32 million excess ballots than required!
What the election monitoring committee of Mousavi issued that year, can be seen here quoting from the book of Massoud Rajavi, “Strategy of Uprising”:

“On July 4 of this year (ie 2009) report of the election monitoring committee of Mousavi was released, referring to new cases of demagoguery and astronomical fraud in elections of the clerical regime. In this report it was disclosed that the Ministry of Interior and 25 of its military governors have used a total of 22 to 32 million ballots in excess of what was required, and moreover, in the room of “aggregation of votes”, which is the darkroom of the Ministry of Interior, they have produced figures however they wanted”.

This, of course, was related to the 2009 elections, in this year’s election in 2017, printing excess ballots took astronomical proportions.

According to the official government news media, the number of printed ballots for this year’s election was more than 200 million. The source of this figure is the terrorist Qods Force site of Tasnim on April 4, 2017. This site is a chain site of the Iranian regime and in this case it can be used. This site has declared the exact number of eligible voters as 56 million 410 thousand and 234 people.

It should be noted that the 200 million ballots, were printed to hold three elections on the same day at the same time, printed:

The first two would be held across the country and hypothetically ballots should have been printed for the 56 million eligible voters.

But for mid-term parliamentary elections, which were held only in four provinces, 60-70 million ballots were not needed to be printed, especially because the relevant elections ridings were:

And the riding of Bandar Lengeh, Bastak and Parsiyan in Hormozgan.

The population of the four ridings are as follows:

Isfahan (the city of Isfahan not the whole province) = about 1, 6 million

Bandar Lengeh and Bastak and Parsiyan = less than 200,000

Total eligible voters in these four ridings are less than two and a half million.

That means based on previous experiences, for these three elections, under no circumstances more than 150-160 million ballots were not needed and it is not clear what has happened to the extra 40 million ballots and why they were printed.

Not to mention that according to official statistics of the Ministry of Interior, in all the years of the rule of this regime, always a number between 25 and 49% of those eligible to vote, have refused to participate in elections.

And in the recent election, Mohammad Bagher Ghalibaf said in the election debates, the present government represents only 4 percent of the population, and given the vote rigging of the opposite faction, which is less than the votes of this faction, the total number of the regime’s personnel and fans are not more than 6-7% of the population.

Thus, according to the official and the so-called government data, one can see the depth of reality of “vote-rigging” of the clerical regime and the details of election fraud.

Of course, given the very conflict between ruling gangs and factions, it would not take long before the dimensions of this year’s astronomical fraud is revealed. But up until now, one can understand how big of a fraud was committed.

Previous articleCall to See Into Atrocious Conditions of Iran’s Prisons and Prisoners
Next articleA Major Split at the Top of Iran Regime, After Sham Presidential Election