Iran: Head Of “Judiciary” Joins in With Menacing Rouhani 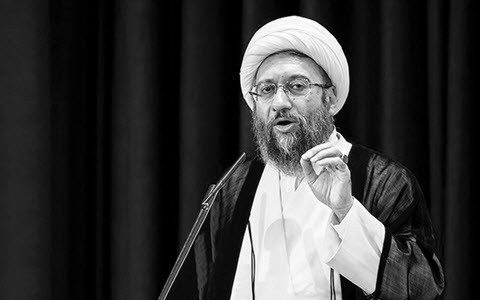 NCRI – In statements clearly aimed at attacking Rouhani, Iranian regime’s head of judiciary Sadegh Larijani said in his Monday May 15 speech “unfortunately some of the candidates acted in such a way as if they were regime opposition, blackwashing and questioning state’s legal entities, a measure that is definitely against regime’s interests.”

“I decided to remain silent only for regime’s interests”, Larijani added, “and I’ll continue to do so till the end of the election. But when the time is right, I’ll say what needs to be said.”

Meanwhile, regime’s first deputy of chief justice Mohseni Eje’i also reacted on Sunday May 14 to Rouhani’s remarks pointing to regime’s ’38 years of imprisonment and execution’, implicitly introducing Rouhani as someone who was formerly a ‘pro public execution’.

Eje’i then pointed to comments made by ‘some of presidential candidates’, saying “the judiciary remains silent for now to avoid any unrest, but it will give necessary, decisive response to such remarks at its proper time.”

“Today, presidential candidates have made comments that are not only against regime’s values and its past, but they’re against Islam and Islamic values as well”, said regime’s judiciary spokesman, adding “their comments are quite contrary to what they themselves used to say in the past. It’s strange how they’re raising such issues only to gain a few more votes, if they ever can.”

Eje’i fully defended the judiciary’s performance, saying “the judiciary is implementing the same law legislated by these same people when they were representatives in parliament. It’s really strange how they’ve forgotten all this.”

Amid clashes between regime’s rival bands over gaining more votes and eventually winning the presidential election, Hassan Rouhani had in his May 9 speech in Hamedan said “people don’t want those who during the past 38 years knew only how to execute and put behind bars.”

In reaction to Rouhani’s remarks, regime’s MP ‘Mojtaba’ said on Wednesday May 7”back in 1980, this same Mr. Rouhani used to shout let’s execute these (anti-revolutionaries and dissidents) in public and Friday prayer places. Mr. Rouhani! Why are you raising such issues now?”

The reality is that a significant part of Rouhani’s positions in regime has been directly, or widely, related to security, having a hand in regime’s highest levels of decision-making and repression of Iranian people, youth, and students.