Iran Regime’s Presidential Candidate:’4% of Population in Today’s Iran Are Rich While the Remaining 96% Are Poor” 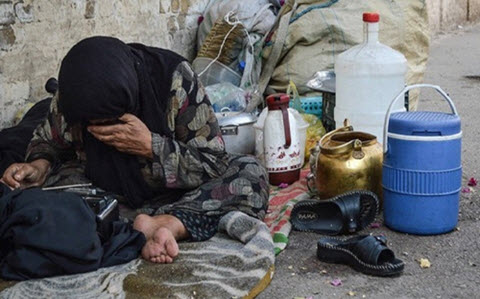 NCRI – With the rival bands seeking their own share of power, Iranian regime’s election time is a time when more details of regime’s critical social and economic situation are inevitably revealed by the candidates, thus challenging the regime in its entirety.

One of the figures raised during the presidential debates was the one related to wealth distribution in Iran’s society, a figure which according to Bagher Ghalibaf, one of the candidates running for regime’s president, shows that ‘’4% of population in today’s Iran are rich while the remaining 96% are poor”, a deep gap between the rich and poor in today’s Iran. Since Ghalibaf is one of regime officials, he definitely doesn’t give a figure higher than the real one, if not lower.

But what does this figure really mean? And aside from the clashes between regime’s rival bands, why such a huge gap has been created in Iranian society?

38 years after coming to power, the fate of the rhetorical deception of Khomeini and Khamenei in support of the poor could clearly be seen in Ghalibaf’s remarks: “Today, the gap between the rich and poor has increased. Social opportunities are not equally distributed, meaning that 4% of population is enjoying opportunities that are not available to the remaining 96%.”

Ghalibaf categorized Iran’s population into two groups of 4% and 96%, with the former holding the rich and rentiers and the latter those who have too little share of social opportunities and wealth of their own country. Although Ghalibaf refuses to give further details, but he’s unaware of additional questions his demagogic claim, raised only to serve his band’s interests, entails.

Questions such as: For how long has Ghalibaf found out about this fact? Is it the result of his research over the past two weeks of his candidacy?

Which category does Ghalibaf himself belong to? Is he going through hard times like those in 96% category?

According to state-run Iran website “unlawful installment sale of properties at low, discounted prices to many municipal directors, members of Tehran City Council, MPs, and even a number of natural persons outside the municipality or city council has been done with direct order of Tehran Mayor (Ghalibaf).”

While implicitly acknowledging having ordered such assignments, Ghalibaf said that he has acted in accordance with the municipal and city council regulations related to issuing permit for and assignment of real estate.

In response to disclosures made by Rouhani’s band against Ghalibaf, the rival band has also revealed the thefts carried out by Rouhani’s brother Hossein Fereydoun, so that state-run ‘Bartarin’ website writes in this regard “with the disclosure of president’s brother’s widespread connections with the ringleaders of banking corruption, as well as his links to bank debtors announced by the judiciary spokesman, the question is when, if ever, the president is going to break his silence regarding his brother’s violations?”

The website also points to Raisi’s plundering with his Astan-e-Quds empire, saying “with rolling out more than 300 agricultural, industrial, dairy, financial, consumer, technical, and commercial products and owning more than 400 thousand hectares of farmland, Astan-e-Quds has turned into an unstoppable giant in Iran’s politics and economy, in a way that neither monitoring entities nor the government dare to approach its privacy or jurisdiction.”

The reality is that the election show is only a clash within the 4% group that has nothing to do with the people. People who the only thing they’ve got under this regime is having to live with an income four times below poverty line. People whose wealth is spent over holding Bashar Assad, Houthis, and Leabanese Hezbollah in power, exporting terrorism abroad and repression at home. People who are buried under the rubbles of the Plasco building, are defenseless against natural disasters, are buried alive deep down in mines, and are afflicted with many more disasters which are rooted not just in this or that candidate, but in the regime in its entirety.

Previous articleIran: IRGC and Institutionalized Smuggling
Next articleElection Sham Is a Ritual of Power Sharing Among the Regime’s Ruling Factions; It Is Categorically Rejected by the People of Iran