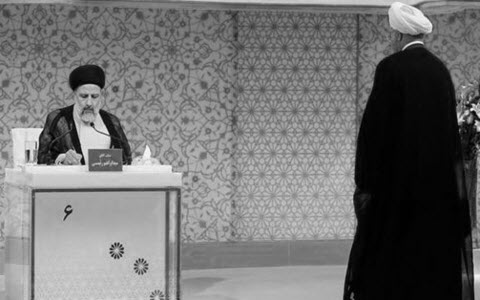 NCRI – With only day remaining until the Iranian regime holds its sham presidential election, the candidates are traveling to different cities attacking and uncovering each other’s secrets.
Mohammad-Bagher Qalibaf, who quit the race on Monday, earlier made allegations of abuse of land acquisition against the regime’s incumbent president Hassan Rouhani and Ishaq Jahangiri, his vice-president. Ebrahim Raisi, speaking in the city of Sari, claimed that money owed to banks by two large debtors is currently costing half a million jobs.

State broadcasting services wouldn’t air Jahangiri’s campaign promotional video claiming that it was delivered too late on May 14.

Mahmoud Ahmadinejad, the regime’s former president who was barred by the Guardian Council from standing as a candidate in this election, repeated his position in a video message that he does not support any candidate.

Speaking in Varamin, Qalibaf raised again the issue of unlawful land acquisition by Jahangiri and Rouhani and accused them of abuse. “Land is given to estate cooperatives of 27,000 employees of the municipalities. Qalibaf hasn’t taken even one meter of that property from anywhere. But you have taken land in the western mini-city for 30,000 Rials which with that price you could not even obtain land in the deserts and salt lands around the city”. Rouhani’s land acquisition dates back to 1987 and. Jahangiri’s acquisition goes back to 1997.

In a separate speech in Shiraz, he mentioned: “If a young person wants to obtain a wedding loan of 3-4 million Tomans he would have to wait for months and years, but those privileged 4% could have loans of 400 million Tomans with zero interest and zero guarantee [that they would pay the money back]”.

Raisi in Urmia said: “I know about many propositions but one who wants to be president must have the capacity. If I speak and open my chest, I have many secrets, but I prefer to uphold the interests of the regime”.

The Tasnim news agency, affiliated to the terrorist Revolutionary Guards (IRGC) Quds Force pointed to a story about the death of Rouhani’s son, Mohammed Fereidoun, in 1997 and raised the issue of his death as “murder” with “specific type weapon” instead of suicide. Tasnim without any evidence of charges or documentation wrote: “Disclosure of discussions about the death story of Rouhani’s child could bring important implications for him but his competitors modestly and politely planed not to even mention it”.