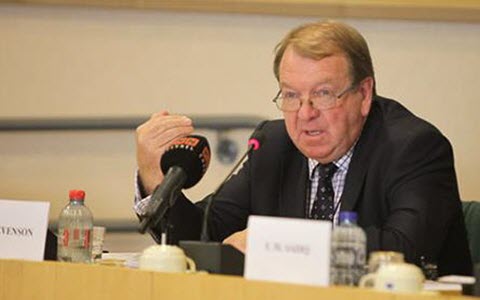 Cracks are showing within the Iranian regime, and the sham elections held last week exposed the growing divisions within the ruling elite, former European lawmaker Struan Stevenson wrote on Thursday for the United Press International.

In his op-ed for the UPI, Mr. Stevenson pointed out that the Iranian people have suffered persecution and repression at the hands of the turbaned tyrants in Tehran for the past 38 years. “The decline and fall of the Islamic Republic of Iran is a spectacle eagerly awaited by 80 million impoverished Iranians and by a world frustrated by decades of threats, terrorism and proxy wars,” he wrote.

Signs of the impending collapse of the theocratic regime are clear to see. The cracks are showing. The fake elections in Iran exposed the growing divisions within the ruling elite. Supreme leader Ayatollah Ali Khamenei hates the West, hates Sunnis, hates Saudi Arabia, hates religious minorities of any kind and as the final arbiter of all power in Iran, favored the election of his friend, the ultra hard-line Ebrahim Raisi, the black-turbaned mullah often cited as his potential successor. The fact that Hassan Rouhani was declared the runaway victor in the presidential election was proclaimed in the West as a triumph for the forces of moderation and reform. Nothing could be further from the truth.

The dog fight in the final weeks of the presidential campaign saw the two front-runners, Rouhani and Raisi, blaming each other for atrocities and corruption on a scale that raised eyebrows even among an Iranian population accustomed to brutality under the theocratic dictatorship. Rouhani accused Raisi of being the main executioner responsible for the annihilation of 30,000 political prisoners in the 1980s, as a member of the notorious “Death Commission” set up by the Islamic Republic’s founder Ayatollah Ruhollah Khomenei. This massacre has remained a closely guarded state secret for decades. Even relatives demanding information about the burial place of their missing loved ones faced arrest and imprisonment. It was a taboo subject. In retaliation, Raisi revealed how the so-called “moderate” Rouhani’s hands were stained with blood from his years of acquiescence to state terror and executions, which propelled Iran into the global No. 1. Slot per capita for the imposition of the death penalty.

Normally, the supreme leader would have carefully adjusted the bogus election results to ensure victory for his favored candidate Raisi. But such is his fear of an uprising similar to the events that followed the fraudulent re-election of Mahmoud Ahmadinejad in 2009, that Khamenei could do nothing. He knows that Iran is a tinderbox ready to ignite at the slightest spark. Another revolution would sweep the despised mullahs from power. But this sudden exposure of his weakness will add to Khamenei’s wrath. His anger at Rouhani will deepen the fault lines that are steadily tearing the ruling elite apart.

Meanwhile network of the opposition People’s Mojahedin of Iran (PMOI or MEK) inside Iran was quite active during the presidential elections with the emergence of thousands of posters and banners bearing the image of Maryam Rajavi, the Iranian opposition leader who is based in Paris. Support for the PMOI carries a mandatory death sentence in Iran, but their posters defiantly proclaimed: “No to the executioner — No to the charlatan — Our vote is for the regime’s overthrow.” Iranian regime’s media bitterly referred to these posters in Tehran.

After eight years of abject appeasement of the Iranian regime by Barack Obama, U.S. President Donald Trump used his first foreign tour as president to visit Saudi Arabia and Israel, the ayatollahs’ two greatest enemies. At the Arab-Islamic-American summit held in the Saudi capital of Riyadh on Sunday, he denounced Iran as the Middle East’s main sponsor of terror and supporter of Bashar al-Assad, stating that: “From Lebanon to Iraq to Yemen, Iran funds, arms and trains terrorists, militias and other extremist groups that spread destruction and chaos across the region.” Trump urged the leaders of more than 50 predominantly Sunni Muslim states to “drive out” the extremists in their nations. The U.S. president branded the Iranian regime as “a government that speaks openly of mass murder, vowing the destruction of Israel, death to America and ruin for many leaders and nations in this room.”

There are increasing signs that Trump administration is considering officially designating Iran’s Islamic Revolutionary Guard Corps as a “foreign terrorist organization.” The IRGC’s extra-territorial wing “the Quds force” has been a listed terrorist organization for years and it is illogical that Obama refrained from extending this designation to the parent body that runs more than half of Iran’s economy and pours billions into the proxy wars that are causing death and destruction across the Middle East. Listing the IRGC as terrorists will plunge a dagger into the heart of the Iranian regime. The mullahs’ grip on power will be further weakened. The regime’s days are numbered.

Struan Stevenson is president of the European Iraqi Freedom Association. He served as a member of the European Parliament representing Scotland (1999-2014), as president of the Parliament’s Delegation for Relations with Iraq (2009-14) and as chairman of Friends of a Free Iran Intergroup (caucus) from 2004-14. He is an award-winning author and international lecturer on the Middle East.