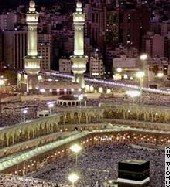 StatementsFormer Majlis (Parliament) Speaker, Mehdi Karroubi, who is also a candidate in the sham presidential elections, admitted that the transfer of explosives to Saudi Arabia in 1986 and the 1987 Mecca riots, which left hundreds of pilgrims dead were carried out on the orders of the regime’s officials and agencies.
In his remarks at the Bou-Ali University of Hamedan, which were quoted by the state-run daily Sharq, on May 31, Karroubi said, “I was the representative of the Imam [Khomeini] in 1985.
In the second year, we noticed that one of the planes with 110 pilgrims on board was detained in Saudi Arabia. An Iranian agency in connivance with the organizers of a pilgrims’ convoy placed explosives in the pilgrims’ bags.”
"Saudi authorities jailed all those responsible for this,” he said, adding, “Some of them who are running head-first toward America these days, collectively lashed out at the (ruling) Al-Saud family, sacrificing the national interests for their rigid-mindedness. This was why the Arabs acted in such a manner the following year, pursuant to our complaint, and martyred a number of people.”
At the time, the regime’s top officials and state-run dailies attributed this criminal and terrorist crime to the People’s Mojahedin. The state-run daily Kayhan wrote on August 1, 1987 about the “cooperation between the Mojahedin and the Saudis in the arrest of Iranian pilgrims” and the state-run daily Ressalat wrote on August 4 the same year, “The heinous, anti-Islamic, and inhuman murder of Iranian pilgrims in the Mecca killings black day was a premeditated act carried out by Iraqi security forces, the Mojahedin, and Saudi police.”
May 18, 2002, the state-run daily Siasat-e Rouz, quoting the pro-Khamenei Youssef Bakhtiyari, as saying that Mohsen Mirdamadi, the Majlis Security and Foreign Policy Committee’s former chairman, who currently poses as a reformer, was among the masterminds of the terrorist act.
Acknowledging that he was a witness to the event, Bakhtiyari said, “Those who went for Hajj procession in 1987, witnessed the massacre of some 500 Iranian pilgrims by Saudi security forces and police. A group of radical students, including Mr Mohsen Mirdamadi and his friends, conspired to enter the Kaaba after the march in Mecca and take over the microphone and chant ‘death to America’ and say other things. Therefore, some of these men who now speak of reform paved the way for that heinous murder with their extremist actions at that time.”
Secretariat of the National Council of Resistance of Iran
June 3, 2005