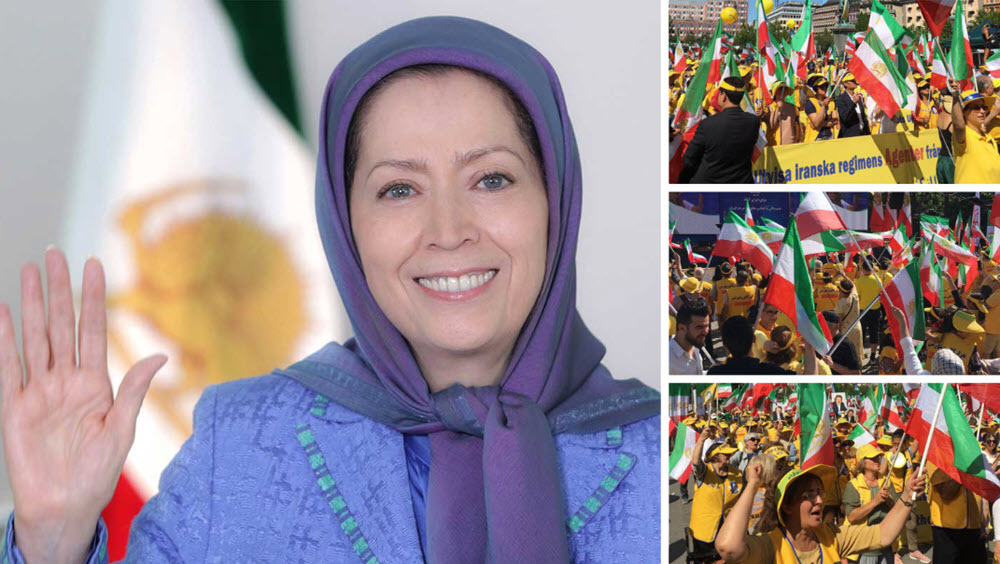 Mrs. Maryam Rajavi: The European Union should list Beyt Khamenei, the Revolutionary Guards (IRGC) and the Ministry of Intelligence (MOIS), main centers of suppression and terrorism, in the list of terrorist organizations and impose a comprehensive sanction on them

On Saturday, July 20, 2019, 5000 Iranians in a major demonstration in Stockholm called for a solid policy and comprehensive sanctions against the mullahs’ regime, terrorist listing of the IRGC, the MOIS and Khamenei’s Beyt (House), as well as recognizing the right of the Iranian people to resist to overthrow the clerical regime.

They announced their full support for the Mojahedin and resistance units and supported Mrs. Maryam Rajavi, President-elect of the resistance and her ten point plan for the future of Iran. They strongly condemned any relationship with and promotion of the mullahs’ regime and called on European governments to prosecute, punish, and expel intelligence agents and terrorist Quds force mercenaries.

Mrs. Maryam Rajavi, President-elect of the Iranian Resistance, described the demonstrators as the vibrant voice of resistance units and the National Liberation Army throughout the world, who have risen up for the liberation of the Iranian people from persecution, poverty and injustice.

Ms. Rajavi said that the time of appeasement with religious fascism in Iran has come to an end, and the resistance and popular uprising have brought the regime to the end. There is no place for the minimum human rights, freedom of expression, justice, equality between women and men, the autonomy and the rights of minorities and nationalities, in the clerical regime. The mirage of transformation and illusion of reform and moderation in this regime will not deceive anyone anymore.

Ms. Rajavi added that it is no longer possible to claim that this regime had no alternative and to propagate that this very regime would be better for the Iranian people. The labeling of the Mojahedin and the resistance of Iran also has no effect.

She stressed that the Iranian people expect Europe, that in the last century experienced the great pain and suffering caused by the domination of Hitler fascism, to understand the sufferings of the people of Iran today and align with the demands of the Iranian people.

Mrs. Rajavi urged the European Union under the Finnish Presidency to list the main centers of repression and terrorism, namely, Khamenei’s Beyt, the Revolutionary Guard Corps (IRGC), and the Ministry of Intelligence (MOIS), as terrorist entities, to impose a comprehensive sanction, to prosecute, punish and expel the mercenaries of this regime, and to recognize the right of the Iranian people to resist to overthrow the mullahs regime and the establishment of democracy and the rule of the people.

Mrs. Rajavi called on the Nordic governments to put pressure on the Iranian regime to open up prison gates and accept an international investigation commission.

The meeting features the speeches of a number of political figures, including Rama Yad, the former Minister of Human Rights of France, Magnus Oscarsson of the Swedish Parliament, Senator Lucio Malan of the Italian Senate, Senator Gerald Michael Horkan and former Minister John Perry of Ireland, Edward Julius Solens, former Minister of the Environment of Iceland, Kimmo Sasi, former minister and parliamentarian from the Finnish Parliament.

In her speech, referring to the 5-day congress of resistance in Ashraf 3, Ms. Rama Yad said that what she saw there was a corner of the resistance’s invincible power and will for Iran freedom. “They are not only an opposition, or even an alternative, but like a state that is ready to save Iran from the destruction that the religious dictatorship has brought. I met people there who devoted all their lives to the freedom of their people.”

Senator Luci Malan said in his speech, “I ask European statesmen, which white point you see in the domestic and foreign policy of this fascist regime, that you insist on the policy of appeasement? Where is the European values? Why do you insist on appeasement with a regime whose 40-year-old record is black? Today, the pursuit of this policy is betting on a dead horse. The regime is on the verge of collapse. Even if we are thinking of our own interests, we must support and recognize the powerful National Council of Resistance alternative. This not only changes Iran’s future but also the future of the region and is very influential in securing global peace and security.”

Secretariat of the National Council of Resistance of Iran
July 20, 2019