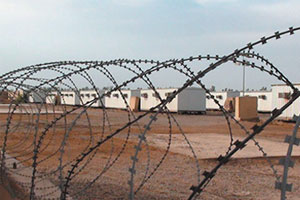 NCRI - In an anti-human measure, the Iraqi forces affiliated with the Iraqi Prime Ministry stationed at Camp Liberty prevented the transfer of three residents to a hospital in Baghdad to receive medical care.

Contrary to the previously reached agreements, the Iraqi forces opposed the patients, who do not speak either Arabic or English languages, being accompanied by their three nurses and interpreters.

One of the patients prevented from going to hospital was Hassan Mohammadi, who had been seriously wounded during the December 26, 2013 missile attack against the camp. He has lost a leg and suffers from serious internal wounds.

The other two patients were Taqi Abbassian and Ahmad Ejazi, both suffering from serious illnesses with cerebral, heart and internal complications. All the three patients were in need of swift medical care and to be accompanied by their nurses.

By preventing the patients from being accompanied by their nurses, the Iraqi forces deprived them from attending their medical appointments that had been arranged with great difficulty. Therefore, their treatment has been greatly delayed.

The approaches made by residents and their representatives to UNAMI and the UNHCR to facilitate the transfer of these patients to hospital proved fruitless.

The Iraqi elements associated with the Iraqi Prime Ministry stonewall Camp Liberty residents' free access to medical care on various pretexts, including preventing nurses and interpreters to accompany the patients without any justification.

So far, the Iraqi government has tormented to death 20 Iranian refugees through such repressive measures and by imposing an anti-human medical siege on them while in Camp Ashraf, their previous residence, and Camp Liberty their current residence.

The Iranian Resistance warns of the consequences of the medical siege being imposed on Camp Liberty aimed at tormenting the patients to death.

The Iranian Resistance reminds the United Nations and the U.S. government of their repeated written commitments on the safety and security of Camp Liberty residents, and calls on them demand the Iraqi Government to end this anti-human siege and stop preventing residents from having free access to medical care.

Secretariat of the National Council of Resistance of Iran
June 3, 2014