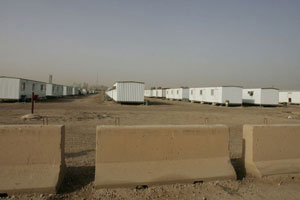 NCRI - The anti-human medical blockade of Iranian dissidents in Camp Liberty continues. Iraqi forces use various pretenses to hamper the transfer of patients to the hospital.

On November 19, Iraqi agents prevented the transfer of two patients to the hospital. This time, there were no excuses to eliminate any patients as all patients were going to the same hospital.

On November 22, again the Iraqi agents prevented the patients from going to two hospitals. This was despite the fact that the patients had prearranged appointments on this day and as their appointments were cancelled they now have to wait for a long time to get new appointments.

On Sunday, November 23, Iraqi agents obstructed the transfer of three patients, including two with heart problems and another patient that had an operation.

Again, on Sunday, November 23, the Iraqi agents prevented the interpreter of a very sick patient who had a gall bladder operation from going along. The patient was to be hospitalized for several days. As a result, the patient could not go for this long awaited operation. It is now eight months that this patient is suffering from severe pain due to gall bladder stone and is threatened by the rupture of the gall bladder that would place patient’s health in a perilous state. This problem was brought to the attention of a team from UNAMI on the scene by this patient and several other patients, but regrettably UNAMI did nothing to resolve this problem and simply justified the criminal act by the Iraqi agents without paying any heed to the real problem of patients that they cannot go for their medical appointments without an interpreter.

Tormenting to death the patients in Camp Liberty is a well-known anti-human policy by the Iraqi forces under the command of Faleh Fayad that so far has caused the death of 22 residents of Ashraf and Liberty. In view of the commitments by the U.S. government and the United Nations regarding the security and well-being of Camp Liberty residents, the Iranian Resistance is calling for an immediate intervention on part of the United States and the United Nations to end the medical blockade of the camp and secure free access of residents to medical services.

Secretariat of the National Council of Resistance of Iran
November 25, 2014