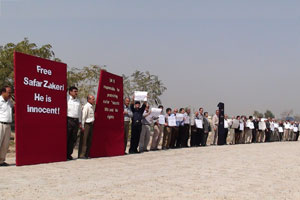 NCRI - Mr. Safer Zakery, an Iranian resident of Camp Liberty who is being held illegally in Baghdad’s Ameriya police headquarters for the third week on the pretext of a suspicious car accident, is being prevented from going to a hospital to undergo medical surgery that had been scheduled two months ago.

Mr. Zakery who was not at all guilty in the car accident as testified by traffic police, is practically being taken hostage at the behest of the Iranian regime by the Iraqi agents under the command of Faleh Fayyad.

Mr. Zakery, suffering from BPH, was scheduled to undergo surgery at the hospital today (Sunday) for which he had been waiting for three years. In the verdict that extended his detention, the investigative judge had specified that he should go to the hospital to undergo his surgery.

On Saturday, April 4, in a deceitful measure to prevent Mr. Zakery from undergoing the surgery, police in Ameriya took Mr. Zakery for a medical test at the hospital in Baghdad and then in a fictitious report prepared for the judge stated that the patient has no need for a surgery.

This is despite the fact that the appointment for Mr. Zakery’s BPH surgery on April 5 had been set by the urologist physician in the hospital who visited him on 18 February 2015, after Mr. Zakery had waited a long time have the necessary medical tests done.

The documents relating to his illness, the advice of the specialist physician, and the appointment for surgery have all been provided to the UNHCR, UNAMI, the U.S. officials, and the investigative judge by a representative of Camp Liberty residents.

This anti-human measure, three weeks into the illegal arrest of Mr. Safar Zakery, leaves no doubt that the Iranian regime’s terrorist Qods Force and the mullahs’ regime embassy in Baghdad are behind the hostage taking of Mr. Zakery.

Once again, the Iranian Resistance emphasizes that the illegal detention of Mr. Zakery is a blatant breach of the Memorandum of Understanding signed on 25 December 2011 by the Government of Iraq and the United Nations, as well as a violation of international refugee law.

Considering the fact that obstructing medical treatment is a crime against humanity, whose perpetrators must be prosecuted and put on trial, the Iranian Resistance also calls on the U.S. government, UNAMI and UNHCR that have repeatedly committed themselves to the wellbeing and security of the residents, to act immediately to end the hostage taking, secure the freedom of Mr. Zakery, and transfer him to hospital to undergo the surgery he needs.

Secretariat of the National Council of Resistance of Iran
April 5, 2015