Maryam Rajavi: Iranian regime cannot get away from being overthrown by committing crime against humanity at Camp Liberty
US and UN must end irresponsible approach, live up to their commitments to Liberty’s security

On Sunday, November 1, 2015, a memorial ceremony for the 23 martyrs of the criminal missile attack on Camp Liberty, seat of members of the People’s Mojahedin Organization of Iran (PMOI/MEK) in Iraq, was held at the headquarters of the National Council of Resistance of Iran in Auvers-sur-Oise.

The Iranian Resistance’s President-elect Maryam Rajavi declared in this meeting: The post-nuclear-deal era is the time for the people of Iran to bring up their most basic demands, on the top of which is freedom. The Iranian nation demands freedom and is crying out loud that it does not want this regime. Khamenei massacres the PMOI with the barrage of missiles and by committing such a crime against humanity he attempts in vain to save his regime from certain downfall. The overthrow of the Velayat-e Faqih regime is the urgent demand of the Iranian people and there is no doubt in that. 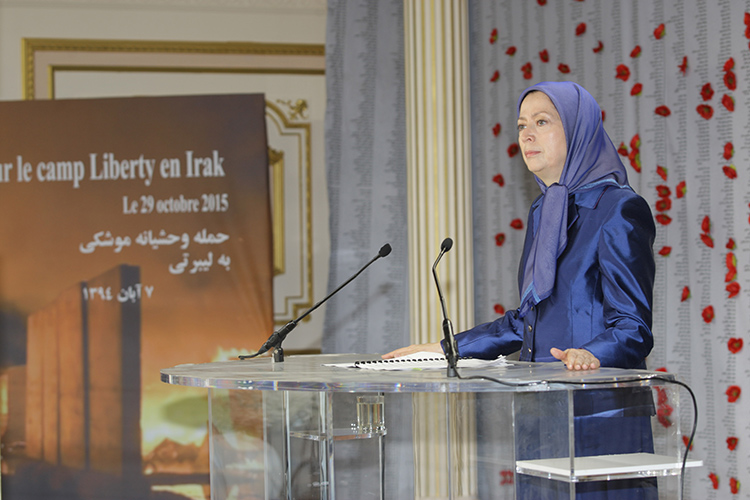 Mrs. Rajavi pointed out the clerical regime’s measures in preparing the grounds for the missile attack, including the dispatch of Intelligence Ministry teams to the gate of Camp Liberty, and added: The Government of Iraq and the United Nations are officially and legally responsible because it has been four years since they signed a Memorandum of Understanding, declaring Camp Liberty as a “Temporary Transit Location (TTL).” In our view, however, the Iranian regime’s agents in the Government of Iraq are responsible for this attack just like the six previous bloodbaths in camps Ashraf and Liberty, and the United States and the United Nations are fully aware of this reality.

Stressing that this crime could have been evaded, if the US and UN fulfilled their commitments on Camp Liberty residents’ safety and security, Mrs. Rajavi called on them to end such irresponsible approach particularly that despite numerous warnings, Camp Liberty is still being run by murderers of Ashraf residents and agents associated with the Iranian regime, and the residents are deprived of their most basic means of protection and security. In the meantime, the process of relocation to other countries which was the betrayed promise of the United Nations and the US, is now being hindered and opposed. She reiterated that Camp Liberty must be recognized as a refugee camp and placed under supervision of the UN High Commissioner for Refugees.

In another part of her speech, Maryam Rajavi laid emphasis on the need for provision of the urgent needs of Camp Liberty residents including urgent medical care for the wounded; stationing of a team of medical specialists in the camp; provision of tools, equipment and material needed for the construction of shelters and reconstruction of devastated sections; provision of security and protective needs including returning of the T-walls, protective vests and helmets and medical equipment and provision of the necessary equipment for the wounded; and called for UN investigation into the savage attack and prosecution of its perpetrators.

Noting false and misleading promises by Rouhani, the Iranian Resistance’s President-elect said: There is just one way to establish democracy and freedom in Iran and rescue it from poverty, destitution and backwardness and that is the overthrow of the Velayat-e Faqih regime in its entirety.

It is exactly for this reason that Khamenei, the regime’s traumatized leader, launches a missile attack on the heroes and heroines who are holding up the standard of the regime’s overthrow higher and firmer than ever.

In the past few months, the clerical regime’s apologists, who have interests in continuation of the mullahs’ rule, have been struggling to create an illusion about the religious dictatorship’s movement towards moderation and rapprochement after the nuclear agreement. They claimed that Rouhani’s promises of moderation would imminently materialize. The largest number of executions in the past quarter of a century, acid attacks on our sisters in Isfahan, murder of Sunnis, and torturing political prisoners to death are also signs of such moderation!

Noting Rouhani’s responsibility in the crime against humanity in Camp Liberty, as head of the regime’s Supreme National Security Council, she asked: Why is it that the governments of Europe spread red carpet for such individuals? Why do you reach out to those whom the people of Iran want them prosecuted?

An exhibition commemorating the 23 PMOI martyrs, laying flowers on a memorial monument, and lighting up of beacons were among the interesting parts of the program in memory of the martyrs.

Previous articleMaryam Rajavi: Hail to the martyrs and to those wounded in Camp Liberty
Next articleCall on USA, EU & UN to take practical measures to protect Iranian refugees in Camp Liberty, Iraq