Demonstration by 3000 Iranians in London 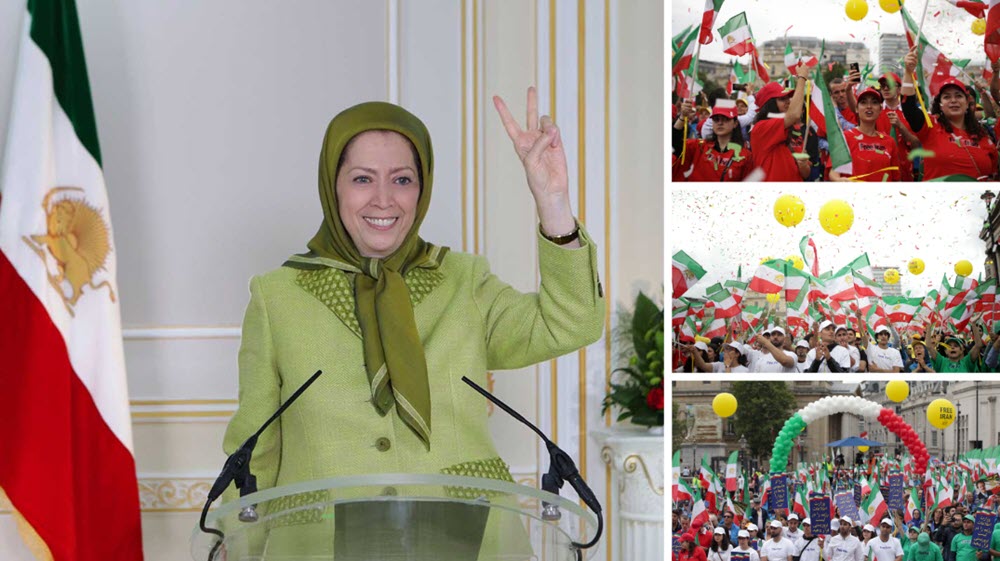 Mrs. Maryam Rajavi: Religious fascism is coming to an end, Britain and Europe must side with the Iranian people for regime change

On Saturday, July 27, 2019, some 3000 Iranians demonstrated on the streets of central London and demanded comprehensive sanctions against the mullahs’ regime and the terrorist listing of the Revolutionary Guards (IRGC), the Ministry of Intelligence (MOIS) and the Office of the Supreme Leader. They supported the Iranian Resistance and its president-elect, Maryam Rajavi, and her 10-point plan for the future of Iran.

They emphasized that while the clerical regime was at risk of being overthrown by the people and the Resistance, the Ministry of Intelligence and the terrorist IRGC Quds Force, more than ever, try to demonize the Iranian Resistance through “mullah-friendly reporters” in various countries especially in the UK in publications such as The Guardian, by spreading fake news. But investing on this faltering regime is doomed to fail. Appeasing the mullahs, the most important source of terrorism and warmongering in the region and in the world, on the pretext of preventing war is as harmful and dangerous as the 1938 agreement with Hitler.

Mrs. Rajavi told the demonstrators: “Your demonstration today in London, marks the peak of a series of Free Iran rallies taken place over the past one-and-a-half months in Brussels, Washington D.C., Berlin, and Stockholm. It is also an extension of the Iranian Resistance’s 5-day annual gatherings, two weeks ago, at Asharf-3.”

She added peace and freedom peace and freedom can only be earned through fighting the mullahs’ religious dictatorship. This is in diametric opposition to the proponents of appeasement who defend the regime under the guise of peace. The result of the policy of appeasement, the clampdown on the PMOI, and overlooking the violations of human rights in Iran in the nuclear deal can be seen in the regime’s attacks on shipping in the Persian Gulf, jeopardizing regional and international security and its terrorist and espionage operations in Europe and the United States.

Emphasizing that the mullahs understand no language except the language of force and firmness, Mrs. Rajavi called on Britain and Europe to halt giving concessions to the mullahs, to not help them decrease the sanctions, and to place the IRGC and the MOIS, Khamenei’s office and Hassan Rouhani on the terror list, and instead of shaking hands with the religious fascism, to stand on the side of the people of Iran for regime change… She specifically urged the new UK government to support human rights and to take action to send an international fact-finding mission to Iran to visit the regime’s prisons and the political prisoners particularly, the women.

“The ruling regime is surrounded by an impatient nation confident that her liberation will not be realized unless the mullahs are overthrown. The clerical regime has no more strength or resources and is struggling in a quagmire which will lead to its overthrow. The era of religious fascism is coming to an end; Iran will be free,” Mrs. Rajavi concluded.

Prominent politicians such as Matthew Offord MP, chairman of the British Committee for Iran Freedom; Struan Stevenson, coordinator of the Campaign for Iran Change; Senator Catherine Noone, Deputy Leader of the Irish Senate; Jim Higgins, former Member of the European Parliament; Senator Gerry Horkan of Ireland; Roger Godsiff MP; Paulo Casaca, former MEP; Brian Binley, former MP; Roger Lyons, former President of the Trades Union Congress (TUC) in the United Kingdom, members of The Law Society of England and Wales, Dr. Mohammad al-Sheikhli, jurist and lawyer of the People’s Mojahedin in Ashraf; Mrs. Dowlat Nowrouzi, the representative of the National Council of Resistance of Iran in the UK; and the NCRI’s Hossein Abedini spoke at the rally.

Secretariat of the National Council of Resistance of Iran
July 27, 2019