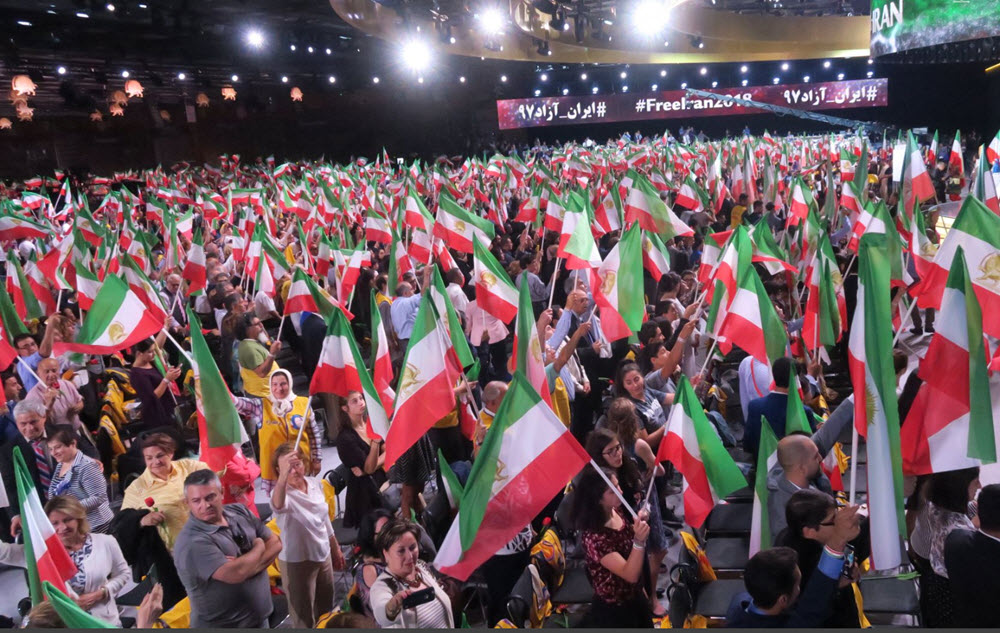 To prevent mullahs’ terrorism, the April 29, 1997 EU declaration on the MOIS personnel and agents must be enforced

Reacting to the October 2 joint statement by France’s interior, foreign and economy ministers, the NCRI President-elect Maryam Rajavi called it “an appropriate and necessary response” to the terrorist acts of “extreme gravity” by the Iranian regime’s Ministry of Intelligence (MOIS) on the French soil.

“Behind all this was a long, meticulous and detailed investigation by our (intelligence) services that enabled us to reach the conclusion, without any doubt, that responsibility fell on the intelligence ministry,” a French diplomatic source told Reuters, adding that deputy minister and director general of intelligence Saeid Hashemi Moghadam had ordered the attack.

This foils the efforts by the mullahs and their agents to portray this act of terrorism as an arbitrary measure by fictitious factions within the regime in a bid to whitewash the hands of Khamenei, Rouhani and Zarif in this regard. It is no longer possible for Rouhani and Zarif to attribute the bombing to its victims, as if they were not responsible for the state-sponsored terrorism and were not part of the religious fascist regime in Tehran.

The Security and Anti-terrorism Committee of the National Council of Resistance of Iran declared on July 11, 2018, “The decision for this terrorist action had been made months ago by the mullahs’ Supreme Leader (Ali Khamenei), the regime’s president (Hassan Rouhani), its ministers of Foreign Affairs (Javad Zarif) and Intelligence, the secretary of the Supreme Security Council, IRGC commanders, the Quds Force, the IRGC Counter-Intelligence and the security-political deputy of Khamenei’s office; the Minsitry of Intelligence was tasked to execute the plan.”

Since three decades ago, the Iranian Resistance has been insisting that the Iranian regime relies on domestic suppression, export of terrorism abroad, and warmongering to guarantee its survival, and is not able to continue its rule without them. All of the regime’s factions are involved in suppression at home, terrorism abroad, and the regime’s missile projects and warmongering efforts.

Had the 29 April 1997 declaration of the European Union been implemented against the Iranian regime’s terrorism contrary to the policy of appeasement, the MOIS would not have dared to attempt bombing of the gathering of Iranians in Paris, since the 5-point declaration called for exclusion of Iranian intelligence personnel from European Union Member States, cooperation to ensure that visas are not granted to Iranians with intelligence and security functions, and suspension of official bilateral Ministerial visits.

The bomb carried by the terrorist diplomat of Javad Zarif’s Foreign Ministry was made with the same explosives used in the ISIS terrorist attacks in France and Belgium. The Sunni Islamic State and the Shiite Caliphate of the mullahs (velayat-e faqih) are acting in parallel under the banner of Islam.

In the wake of the Iranian people’s uprising in December-January, the clerical regime has found its only way out in stepping up its terrorist activities. The regime’s ill-fated attack on the MEK gathering in Albania in March 2018, its aborted terrorist plot against the Iranians’ gathering in Paris in June 2018, and the arrests in August 2018 of two MOIS agents in the US who were preparing for terrorist operations against the MEK, are among such measures.

To prevent the Iranian regime’s terrorism in European countries, the EU declaration of April 29, 1997, must be enforced in dealing with the MOIS intelligence personnel and agents.

– the suspension of official bilateral Ministerial visits to or from Iran under the present circumstances;

– confirmation of the established policy of European Union Member States not to supply arms to Iran;

– cooperation to ensure that visas are not granted to Iranians with intelligence and security functions;

Secretariat of the National Council of Resistance of Iran
October 2, 2018

Albanian police and media reported the arrest of an agent of the Iranian regime's Ministry of Intelligence and Security (MOIS), with initials B.P. A...
Read more
Search