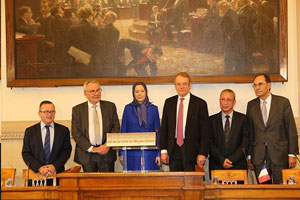 Following the call by Mr. Massoud Rajavi, the Leader of the Iranian Resistance, to commemorate the martyrs of the November 2019 uprising, Resistance Units...
Read more
Statements

Following the recent revelations about the clerical regime's terrorist plot against the Iranian Resistance in Paris in June 2018, and Assadollah Assadi, regime's diplomat-terrorist...
Read more
Statements

Call to commemorate the anniversary of the November 1998 protests The Resistance Units and supporters of MEK wrote graffiti and posted leaflets and placards in...
Read more
Search