HassanRouhani: “World won’t be safe for anyone” unless mullahs manage it 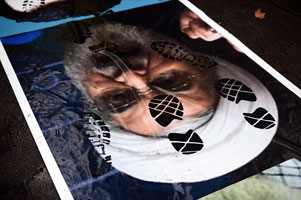 NCRI – In his speech at the United Nations General Assembly, Hassan Rouhani, the president of the clerical regime, repeated the mullahs’ lies and obfuscations, in an attempt to mislead the international community.

As the extent of the regime’s meddling in Syria and Iraq is further exposed with each passing day and as large sections of Yemen, including its capital Sanaa, have practically fallen under the control of the Iranian regime and its proxies, Rouhani unabashedly said: “The notion that Iran seeks to control other Muslim countries in the region is a myth fanned in the recent years in the context of an Iranophobic project.”

Rouhani described his regime as an element of “stability and serenity” and blamed the West for turning the region into a haven for “terrorists.”

His remarks come after a member of the regime’s parliament revealed some details of the regime’s plans for exporting terrorism and fundamentalism to the countries of the region under the pretext of “unifying Muslims,” after the recent developments in Yemen.

Alireza Zakani said on September 20: “After the victory in Yemen, surely it is now Saudi Arabia’s turn… Today, the Islamic Revolution has three Arab capitals under its dominion, and shortly, it will also take over Sanaa and will make operational the system to unify Muslims.”

Rouhani’s speech also commented upon the anti-extremists coalition of nations, from which the Iranian regime was barred when it was not allowed to take part in the Paris and Jeddah conferences.

This has enraged Rouhani and other officials, who are worried about the regime losing gains in the region.

“I believe it is a strategic mistake,” Rouhani said “if countries claiming leadership of the coalition do so to continue their hegemony in the region.”

He asked that the leadership of the fight against terrorism be trusted to the mullahs. “The countries in the region who are better familiar with the problem, through cooperation and coalition, can better assume the responsibility for this confrontation and its leadership,” he said.

Rouhani’s further remarks took on a threatening tone: “I declare that if today… this job is not trusted to the professional, tomorrow the world will not be safe for any one.”
While with public speeches like that at the UN Rouhani tries to show his regime is countering extremism with the “true message of Islam,” the extremist and repressive policies of his regime have gone on unchecked.

During his time in office, the number of executions has surpassed 1,000, many of them being carried out in public. Furthermore, many have been subject to punishment by amputation, in keeping with Khomeini’s 1982 pronouncement that he wanted a leader of his regime to be “a caliph who cuts off hands, flogs and stones to death.”

Rouhani’s UN speech directly addressed nuclear negotiations between Iran and the P5+1, accusing the international community of “demanding too much” and saying that a nuclear accord will make possible “the focus to resolve the important regional issues, including the very important matter of fighting violence and fanaticism in the region.”
Only a few days earlier, senior officials of his government had told Reuters that “Iran stands ready to cooperate with the United States and its allies to stop ISIS, but it wants to see more flexibility considering its uranium enrichment program.”

On Thursday, in a message to a major rally of Iranians in New York against the presence of Rouhani at the General Assembly, Mrs. Maryam Rajavi, President-elect of the Iranian Resistance, said that ISIS is the by-product of export of fundamentalism and terrorism by the Velayat-e faqih regime and the shortcomings and weak response of Western states regarding the aggressive policy of this regime in the region.

This regime is the godfather of ISIS and stands at the heart of the problem and cannot be part of the solution… Therefore, any participation by this regime in the issues of Iraq under the pretext of confronting ISIS is a lethal and irrevocable blunder and the prerequisite for the success of the campaign against ISIS and extremism under the banner of Islam and for the establishment of peace and democracy in the region is to adopt a firm policy towards the Velayat-e faqih regime and to cut off its long arm from Iraq and Syria.

Mrs. Rajavi stressed that the mullahs face an impasse in their nuclear program. If they decide to abandon their nuclear weapons project, they would face an internal crisis and the prospect of an implosion and if they decide to press on with their nuclear program, they have to confront the international community. Therefore, they are looking to exploit the regional developments to buy time. She added that the only solution is the full implementation of the Security Council resolutions by this regime and the intrusive and unconditional inspection of all suspicious centers and sites in Iran.

Secretariat of the national Council of Resistance of Iran
September 25, 2014

Iran: Fire Festival (Chaharshanbe Suri), No.3 – Despite Mobilizing the Repressive Forces, the Youth Turned the Fire Festival Into an Act of Defiance Against...