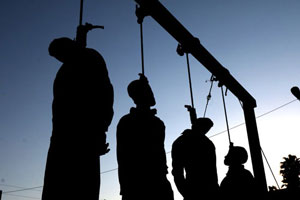 NCRI – The Iranian regime’s henchmen secretly hanged at least 12 inmates on Thursday (26 March 2015) in prisons in cities of Shiraz and Mashhad.

In Shiraz, the prisoners were transferred to solitary confinements two days prior to the Iranian New Year (Nowruz), therefore, the victims spent the New Year’s day in isolation awaiting execution.

The religious dictatorship ruling Iran has refrained from publishing any report or information on the prisoners.

The growing number of executions, including many carried out in secret, are just trivial examples of the nationwide repression that continues to take place in Iran since Hassan Rouhani became president of the clerical regime.

Secretariat of the National Council of Resistance of Iran
March 28, 2015

Execution of at Least Six Prisoners in Yazd, Qazvin, Zabol, Tabriz and Urmia in Two Days

Call for urgent action to save the lives of death row prisoners and for an international delegation to visit Iran prisons On Wednesday and Thursday,...
Read more
Statements

The clerical regime, despite the experts’ advice, staged a Friday prayer and mourning ceremony in Qom, risking people’s lives. Afterward, the head of...
Read more
Statements

• Rouhani brazenly blamed the people for the next Coronavirus wave, saying that wherever the people obeyed, we could control it, and wherever the...
Read more