Iran: A Detainee of the Recent Protests, Died Under the Torture

With the killing of another detainee of the recent Protests, called Taleb Basativand, under torture in the prison of Ilam (the city in west of Iran), the number of people arrested during the uprising who were killed under torture reaches at least 13.

The Iranian resistance calls on the public, especially the brave youth, to support the families of martyrs and prisoners of the uprising and to express solidarity with them. The Iranian resistance, calls for the condemnation of this crime by the United Nations Security Council, European Union and its Member States and all human rights defenders, and demands urgent action fir the release of the detainees of the uprising. The Iranian Resistance calls on the High Commissioner and the UN Human Rights Council to form an international truth-finding delegation to investigate the crimes of the mullahs’ regime against political prisoners.

Taleb Basativand, a student at Ilam University, who was arrested by law enforcement agents during the uprising of January, was temporarily released on bail. Subsequently, on February 18, the clerical regime intelligence arrested him again and after eight days, on Monday, February 26, the news of his death was given to his family. By threatening his family, they warned them against giving any information about this crime. 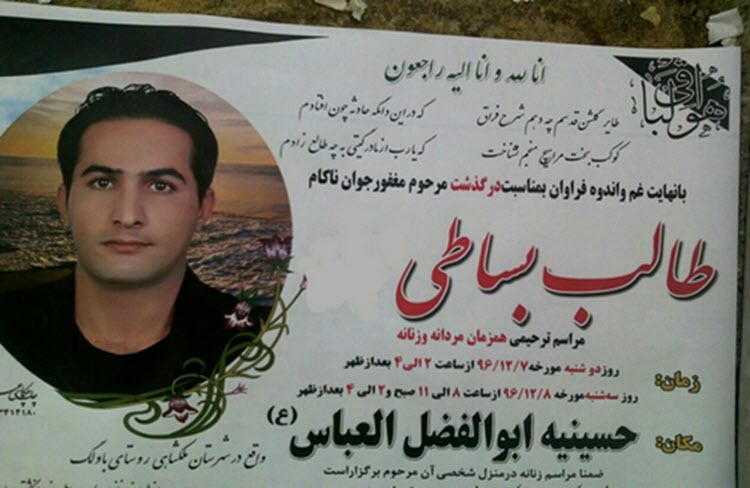 In order to cover up these crimes, the liar and criminal mullahs have blamed the death of the detainees of the uprising in their prisons to suicide for feeling guilty or the excess use of drugs or not having access to drugs. Killing of opponents under torture and eliminating them is a known practice of four decades of disgraceful clerical rule. In one of the latest cases in this regard, the clerical regime announced the killing of Kavoos Seyyed Emami, a university professor and environmental researcher, two weeks after his arrest, as suicide.

Secretariat of the National Council of Resistance of Iran
February 27, 2018

The defiant youth in Tehran and other cities, including Qom, Isfahan, Andimeshk, Khorramabad, Gorgan, Karaj, Babolsar, etc., set fire to the entrances of the...
Read more
Statements: Iran Protest

In recent weeks, the Resistance Units and young supporters of the Mujahedin-e Khalq (MEK/PMOI) have been distributing messages and call to actions by Mrs....
Read more
Search