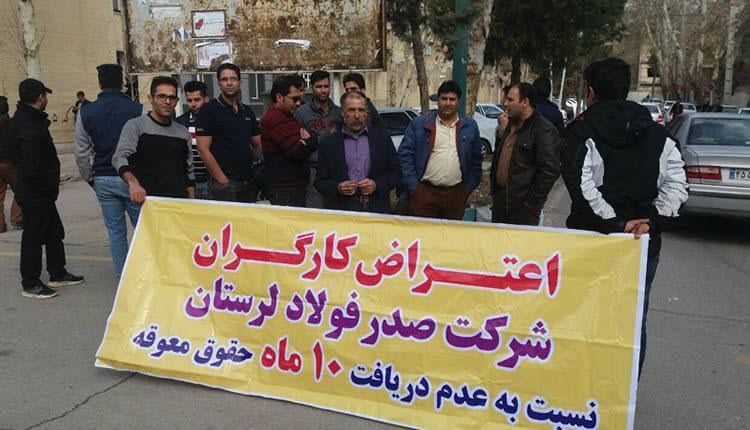 On Saturday, March 3, in addition to widespread protests in the economic powerhouses of Ahvaz National Group, Haft Tapeh sugar cane company, Varzaneh farmers in Isfahan, and looted people by government institutions, there were protests all over the country by the army of the hungry and the unemployed:

1. The looted members of the Arman Vahdat Institute in Ahvaz chanted in front of the institute in their gatherings: Khuzestani dies, does not accept degradation; no nation has seen such a shameless government; is this the central bank, or the pillage center.

2. The looted people of the Institute of Nations in Khorramabad gathered in front of and inside the branch headquarters. They chanted: Death to the incompetent authority.

3. A group of drivers and workers of the Tehran and Suburbs Bus Company continued their protest for the twentieth day. They object to the five-year delay in delivering their homes. Workers chant in their protest rallies: One less embezzlement, our problem is solved.

4. The Mahshahr petrochemical workers chanted in their gatherings against the regime’s governorate: As long as we do not get a response, this protest continues. They are protesting the failure to implement the job classification scheme and the failure to pay for the bad weather and hard work conditions, calling for the removal of the corrupt and predatory manager of the ensemble.

5. About 70 green space workers in the municipality of Ahvaz district 2 gathered in front of the municipality. In addition to their unpaid salaries, they are demanding the return of eight expelled workers.

6. Bandar Khomeini’s municipality workers gathered in front of the municipality in protest of failure to pay their three months’ salary.

7. The dhow owners of Bandar Rig in Bushehr protested against the ban on the import of goods by sailors and crew members in front of the customs office in Bushehr.

8. Ganaveh dhow owners and sailors also gathered in front of the customs in protest against the prohibition of limited imports of goods, which are the only means of providing for their livelihoods.

9. Tractor owners from the Khalidabad village of Natanz gathered in protest against the non-payment of their fuel quotas by queuing their tractors.

10. A group of workers from Sadr Khorramabad Steel protested in front of the governorate. They are asking for their unpaid salaries for few months.

11. Textile workers in Ghaemshahr gathered in front of the city’s municipality in protest of their uncertainty at the end of the year.