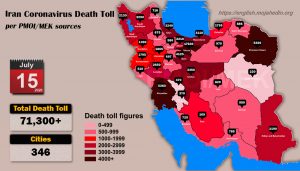 Unprecedented dimensions of the Coronavirus disaster in Tehran and Alborz provinces

The spokesperson for the regime’s Health Ministry put the number of victims in the last 24 hours at 199 and the number of patients under intensive care at 3,411, the highest since the beginning of the outbreak. Like previous days, she also declared 25 provinces in red or on alert.

Iraj Harirchi, the regime Deputy Health Minister, told Mehr news agency, on July 15, “Today, there are 187 red cities and 92 orange cities, and this is a matter of concern… Zanjan has the highest number of hospitalizations. Daily hospitalization for every 100,000 people in Zanjan is about 7, and it’s six people per 100,000 for South Khorasan Province.” He added, “Obviously, we will not have a universal vaccine anywhere in the world at least for another year.”

Mohammad-Reza Zafar-Ghandi, the head of the regime’s Medical Organization, told ILNA Today, “Hospitals have problems with ICU beds, and we have a shortage of beds in some of the key hospitals … The healthcare staff wear out quickly and contract the virus. For example, several staff in the cancer wards of Khomeini and Sina hospitals have been infected with the Coronavirus.”

Minoo Mohraz, a member of the NCCT, told ISNA, Today, “We are amid transmitting the disease … The number of outpatients has increased tremendously, and we are at a peak.”

Alireza Zali, the head of NCCT in Tehran, told Entekhab daily, yesterday, “Tehran is facing a unique situation … In the last 24 hours, we have admitted 890 Coronavirus patients in Tehran. Therefore, the situation in Tehran is complex and requires a completely different solution from other provinces …. One-week restrictions are not enough, and the scope of restrictions should be increased in the coming weeks.” The deputy mayor of Tehran reported that 668 people in Tehran’s municipality had been infected with Coronavirus, and 14 have lost their lives.

In Alborz Province, the governor told Mehr news agency, yesterday “Clichés and repetitive sloganeering is of no use. We have lost 50 people in Alborz in the past 48 hours… Medical workers are fatigued… We had 1,083 suspected cases on Sunday and 800 yesterday… We have 13,000 special care patients in Alborz that may be vulnerable but have not declared them as Coronavirus cases.”

The president of the Medical Science University in Qom told IRNA Today, “The infection rate of the Coronavirus in Qom has increased three to five-fold in recent weeks… Until a month ago, the number of positive test cases was lower than 15%… But towards the middle of June, it has increased to 50%.”

In Kerman, the spokesperson for the NCCT told the state TV yesterday, “Infections and deaths from this disease in Kerman Province are still on the rise, and in the past 24 hours 18 persons have died, the highest toll in one day in Kerman since the start of the epidemic.”

In Lorestan, the head of the Pol-Dokhtar health and healing network said, “The unprecedented daily increase in cases in this county is becoming critical, and the continuation of this trend will cause severe problems for the people and the health network,” reported Mehr news agency, yesterday.

According to ISNA, the Medical Sciences University in Ahvaz, Khuzestan, announced yesterday, “We don’t know when Khuzestan will no longer be red … It is still red … Twelve cities in Khuzestan are red, four are orange, and eleven are yellow. We believe the orange cities are the same as the red ones.”

Iran: The Staggering Coronavirus Death Toll Is Above 424,900