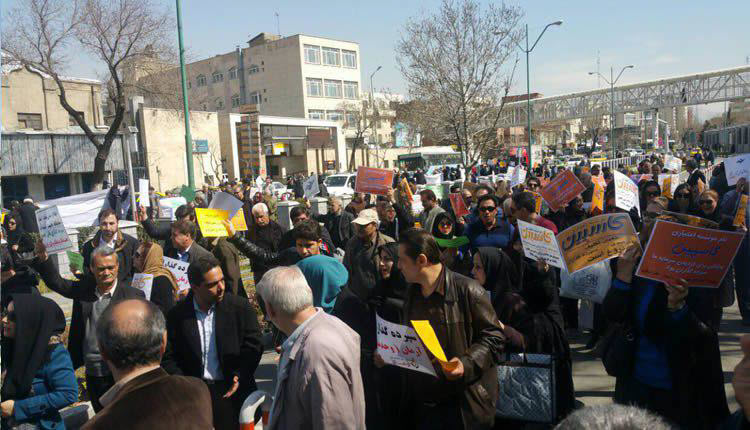 On Saturday March 3, 500 looted creditors of the Caspian, the Iranian Alborz, Samen Al-Hojaj, Arman Vahdat and the looterd people who came from Mashhad to Tehran, gathered in front of the regime’s parliament.

The protesters chanted: Death to Rouhani, death to Ali Larijani (speaker of the regime’s Parliament); Is this the house of the nation, or the thieves’ center; Victory is from God, down with this deceitful government; they stepped on Islam, they slammed the people; Larijani is a judge (head of the judiciary), he is playmate with the thieves.

The protesters demanded in their handwritten notes and banners that the performance of thise institutions, which were fully dependent on the Revolutionary Guards, the Judiciary and other repressive organs of the regime, be clearly stated. At the end, they began a march.

The looted members of the Arman Vahdat Institute in Khorramabad simultaneously held a protest rally in front of the branch of the institute with the slogans of death on Seif (head of the Central Bank).

In Ahvaz too, looted people of the Arman Vahdat institute gathered in front of its branch. They chanted: Khuzestani dies; he does not accept disgrace; is this the central bank, or the thieves’ center?

Secretariat of the National Council of Resistance of Iran
March 3, 2018