Iran: Demonstrations of Educators, Workers, Retirees and Looted People in Tehran and Across the Country 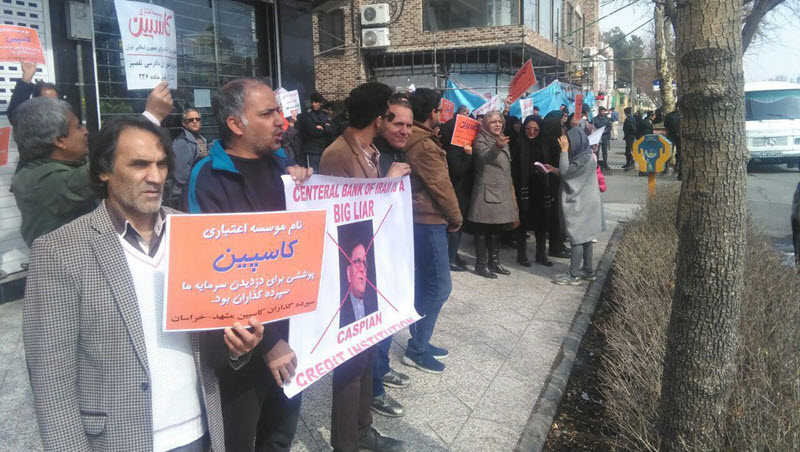 On Wednesday February 21, 2018, Tehran and other cities witnessed protests held by educators, workers, retirees and looted people of government institutions including Caspian, Afzal Toos, Arman Vahdat and others.

An important part of the protesters in front of the parliament was the looted people who were chanting slogans of: “They are using Islam, to pound the people”; “Larijani is a judge, he is playmate with the thieves”; “the government betrays; Parliament supports it”; “n o other nation has ever seen such a shameless government”.

The looted members of the Arman Vahdat state institution from different cities, especially Ahvaz, participated in the rally.

The retired educators, who were among the demonstrators in front of the regime’s Parliament, were chanting: “livelihood, dignity, is our inalienable right”, “we will not rest, until we get our rights”, “political prisoner must be freed”, “imprisoned teacher must be freed”, “the teacher is behind bars, the classroom is empty”. They were saying while the minimum wage set by the regime itself is four million tomans ($800), they are paid less than one million tomans and are unable to provide the basic needs for themselves and their families. The protesters, in whom women played a significant role, had banners reading: “Unity, awakening, not poverty not unemployment”, “bread, housing, freedom”, “effective insurance and free treatment is our absolute right”, “the looters of the short-term pension funds must be fired”, “the fight against corruption and embezzlement ensures the legal and welfare protection of retirees.”

The retired workers protesting in front of the parliament, all of whose rights and salaries were lost by the so-called social security organization of the regime, had a banner in their hands reading: The workers’ community has no savior.

At the same time, looted victims of Caspian in Rasht, Mashhad, Parsabad, Ardebil and Abhar protested to get their deposits back. In Rasht, protested threw paint balls at the Caspian Golsar Branch glasses and tossed tomatoes and eggs to it.

In Parsabad, Ardebil, looted people gathered and protested in the Caspian Branch, and a confrontation between the protesters and the staff took place.

In Mashhad, looted people protested against the Caspian Branch on Khayyam Street. They chanted: Caspian has stolen, the government has supported;

In Islamshahr, the looted people of the Asr Novin Institute protested in front of Azad University to get back their deposits.

About 300 workers gathered in protest against the non-accountability of social security in front of the old Parliament building of the regime in Tehran.

Workers at Kisson Company in Assalouyeh gathered for the third consecutive day in protest to non-payment of their five months’ salary.

Erin Mitsubishi’s workers and depositors gathered in front of the company in West Tehran in protest of the looting of their property.

In Gorgan, bakeries gathered in front of one of the centers of the industry, mining and trade organization in protest of the lack of job security.

Secretariat of the National Council of Resistance of Iran
February 21, 2018