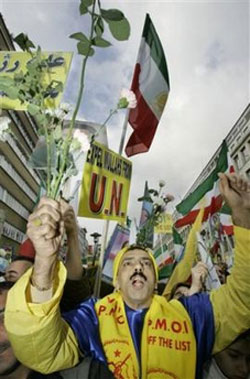 Simultaneous with the European Union’s meeting of foreign ministers’ in Brussels today to review its policy toward the religious, terrorist dictatorship ruling Iran, more than 35,000 Iranians staged a magnificent rally outside the EU headquarters, demanding the immediate referral of the clerical regime’s nuclear file to the Security Council and the removal of the terrorist tag from the principle Iranian opposition force, the People’s Mojahedin Organization of Iran (PMOI).
In a live satellite video link to the rally, the largest of its kind in Europe in recent years, the Iranian Resistance’s President-elect Maryam Rajavi urged the world community, particularly the European Union, to end two decades of appeasing the mullahs of Iran. She stressed that the solution to the Iranian problem, was neither appeasement, nor foreign military intervention, but democratic change by relying on the Iranian people and their Resistance. 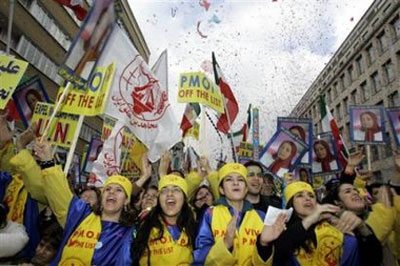 "Two weeks ago, the mullahs’ President Mahmoud Ahmadinejad engaged in a demagogic tirade, threatening to set regional and Islamic nations ablaze and beating the drums of war in a bid to conceal the dire state of a regime that is on its last legs. His speech, a revolting call for religious war proved, as the Iranian Resistance predicted four months ago, that owing to deep crises and fundamental weakness of their regime, the mullahs have, in a pre-emptive move, declared war on the international community," Mrs. Rajavi said.
She added, "Western countries have condemned the pernicious remarks by the mullahs’ President. Long overdue, the reaction is in no way sufficient. What is necessary is to take action. Western leaders keep silent on the fundamental fact that Ahmadinejad’s warmongering is a direct consequence of their policy of appeasement."
Emphasizing, "It was proven that as long as the mullahs’ dictatorship remains in power, it will show enmity to Middle East peace and will act as the main obstacle to the establishment of democracy in Iraq," the Iranian Resistance’s President-elect called for the "referral of the Tehran regime’s nuclear file to the United Nations Security Council and sanctions against the religious tyranny ruling Iran, prosecution of its leaders for committing crimes against humanity, including the massacre of 30,000 political prisoners in 1988, and the removal of the terror tag from the Iranian resistance movement."
Some 30 members of parliament from different European countries addressed today’s rally, underscoring their support for the Iranian Resistance and its struggle for freedom on Iran and demanding the removal of the terror tag from the PMOI.
They included Morten Hogland (Norway), Tunne Kelam (Estonia), Lord Corbett of Castle Vale (Britain), Lord Russell-Johnston (Britain), Brian Binley (Britain), Paolo Casaca (Portugal), Senator Patrik Vankrunkelsven (Belgium), Jean-Pierre Malmandier (Belgium), Karin Lalieux (Belgium), Talbia Belhouari (Belgium), Senator Erika Thijs (Belgium), Dirk Claes (Belgium), Senator Pierre Galand (Belgium), Herman Van Rompuy (Belgium), Jaroslav Zverina (Czech), Dietrich Thiede (Germany), Stefan Sarreach (Germany), Helmut Markov (Germany), Gereta Tuellmann (Germany), Ryszard Czarencki (Poland), Lars Rise (Norway).
In part of his speech, Lord Corbett of Castle Vale from the British House of Lords said, “More than half of the British House of Commons and 122 Peers in the House of Lords demand that the PMOI be removed from the list of terrorist organizations. We are the many, the mullahs are not. It is not the PMOI who are terrorists, it is the mullahs. It is not the PMOI that is providing weapons and training to the terrorists in Iraq, it is the mullahs. Why then is the terror tag not around the necks of the mullahs? It was the Iranian Resistance that warned the world that Islamic fundamentalism was a global threat. Today, that threat is evermore approaching. The Iranian regime’s nuclear file must be sent before the UN Security Council.”
Mr. Paolo Casaca, a member of the European Parliament, said that the time had come to send the regime’s nuclear file to the UN Security Council. He also urged the removal of the unwarranted terror tag from the PMOI, while voicing support for the Iranian Resistance in its struggle for democracy in Iran.
British MP Brian Binley said, “A country that openly promotes suicide operations and threatens the existence of another state is a threat that we cannot ignore and I and my colleagues in the British Parliament will do all that is necessary to isolate this regime.”
Belgian Senator Pierre Galand, first vice chair of the Senate’s Foreign Affairs Committee, said, “My colleagues in the Senate believe the PMOI should be removed from the terrorist list immediately.”
German MP, Stefan Sarreach, voiced support for the third option proposed by Mrs. Rajavi and urged the EU to take up the Iranian regime’s dangerous nuclear program at the Security Council.
The NCRI’s Foreign Affairs Committee Chair Mohammad Mohaddesin said, “The time for waiting is over. The ruling mullahs’ have brutally suppressed the Iranian people and threatened peace in the region and the world. The EU should not sacrifice human rights at the altar of short-term economic interests. Send Tehran’s nuclear file to the Security Council now.”
Secretariat of the National Council of Resistance of Iran
November 7, 2005