Iran: Execution of Five Young Prisoners and Hand Amputation of Another in Three Days 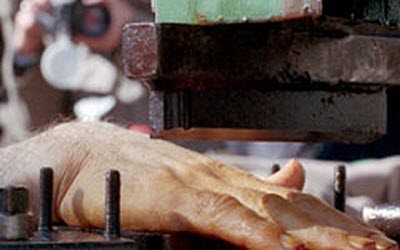 During the nationwide uprising of the Iranian people against the detested rule of Velayat-e faqih, the regime’s judiciary executed five young prisoners from January 15 to 17. On January 17, a brutal sentence to amputate a young man’s hand for stealing several sheeps was carried out in Mashhad Prison.

Two prisoners of 30 and 33 years old were hanged on January 17, 2018 in the Karaj Central Prison. The day before, two other young people who 19 and 20 at the time of their arrest were executed in Mashhad. On Monday, January 15, a 27-year-old prisoner was hanged in Babol prison.

Meanwhile, Abolfazl Chezani, who was arrested at age 15, is now on the verge of execution in Qom prison after serving four years of imprisonment.

The purpose of these executions is to exacerbate the atmosphere of intimidation of young people who have suffered from oppression, poverty and unemployment, and who in recent weeks have shaken the pillars of the clerical regime with their uprising. The response of the people, especially the youth of Iran, to this brutality is the continuation of the uprising until the overthrow of the corrupt and oppressive clerical regime.

The Iranian Resistance calls on all the international human rights organizations and bodies to take urgent and effective measure to combat arbitrary executions and brutal sentences.

Secretariat of the National Council of Resistance of Iran
January 19, 2018

According to doctors: In Modarres Hospital in Tehran, all beds, even in the emergency ward, are filled with Coronavirus patients. One hundred and...
Read more
Search

Mohammad Sadat Khansari - 18th October 2020
On November 27, the trial will begin in a Belgian court for the Iranian regime’s terrorist- diplomat Assadollah Assadi. The former third counselor of...