Iran: Failure of the Mullahs’ Counter-Demonstration 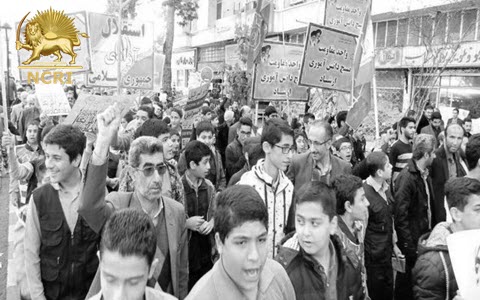 On Wednesday, January 3, despite the scandalous attempt of the regime to launch counter-demonstrations in some cities, the people in different cities came to the streets again on the seventh day of the uprising to cry their hatred of the ominous regime of mullahs.

In Tehran, in spite of the intensive presence of repressive forces, including police and intelligence forces, IRGC, Bassij, plainclothes and riot police and motorcyclist mercenaries, various parts of Tehran were host to demonstrations and confrontation of outraged youths with repressive forces. In the streets of northern Kargar and Rustam, a severe clash broke out between the people and the riot police.

In Enqelab Square, the riot police attacked the people who were chanting “Khamenei, shame on your deception”, “Death to the dictator” and “we die, but we will take Iran back”; and a violent clash broke out between the criminal riot police and the people. Some youths were injured in these clashes, but others replaced them.

In Kargar Ave. the rallying protesters were chanting “Death to the Dictator”, “I’ll kill whoever killed my brother”, “Death to Khamenei” and “We shall fight, we shall die, we shall take Iran back.” In the Keshavarz Boulevard also people rallied.

The clerical regime has installed shotguns on the rooftop of the government buildings in the streets surrounding Enqelab Square.

In yet another event, the families of detainees in Tehran gathered in front of the notorious Evin Prison today. According to the regime, 450 people were arrested in Tehran only in days December 30 till January 1st.

In fear of the spread of the demonstration in Tehran, the mullahs’ regime has imposed a heavy internet filtering.

Secretariat of the National Council of Resistance of Iran
January 3, 2017