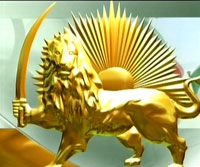 Complete State of Alert for the repressive forces, Tehran and Suburbs closed for five days,
removal of portraits of Khamenii

In its propaganda attempts, the religious fascism ruling Iran tries to show the Conference of Non-Aligned as a sign of “stability and internal security” and “development of the international success of the regime.” However, since a week prior to the Summit, it had established a virtual state of martial law in the capital.

1 – All of the repressive forces of the clerical regime – Revolutionary Guards (IRGC), Basij militia, security forces, intelligence ministry and army – are on complete alert; all the patrols and the militia and police checkpoints have extremely intensified becoming ubiquitous.
Besides this state of alert of the IRGC and the militia who are responsible for the security of the summit, the head of the security forces, Ahmad Reza Radan, talked about “deployment of 850 security teams, 360 checkpoints, 110,000 personnel with 2,900 vehicles and 2500 bikes” and also “creation of four levels of security and military” as well as “imposing a series of restrictions” regarding security in Tehran. He also noted increased “border security, particularly in the south-east and north-west of Iran” (official news agency Isna, August 25). He underlined that during the summit, he will have “no kidding” (official media August 20).

2 – Meanwhile, the repressive forces have resorted in recent days to arbitrary arrests under the pretext of “cleaning recreation centers and parks” or that of those who “want to make trouble to disrupt the summit” (Mehr News Agency of the Ministry intelligence, August 25), and have tapped telephone lines and internet monitoring.

3 – To prevent the slightest hint of protest, by the order of Khamenei, all the government offices, banks and business centers, public places such as libraries, will be closed from August 27 to 31 (5 working days). But according to the authorities, these closures will irreversibly damage country’s economy.

4 – In addition to Tehran, Alborz province (bordering Tehran) will also be closed for 3 days.

5 – For the fear of seeing youth destroying or burning portraits of Khamenei, authorities have removed many of them by replacing them with commercial billboards causing extensive quarrels within the regime.

However, this disgraced stage show failed to attract the attention of the majority leaders of non-aligned countries in spite of an unprecedented suppressive measures and plunder of the Iranian people’s national wealth. This show will not save the detested and illegitimate mullahs’ regime from internal and international crises.

Secretariat of the National Council of Resistance of Iran
August 28, 2012

Previous articleIs Iran a part of the solution in Syria?
Next articlePress Release- 28 August 2012 -The US, UN, and EU Should Strongly Condemn Attack on Ashraf Residents & US Observers Should Be Present In All Phases of Transfer

Iran: Freed Political Prisoners and Families of PMOI Members Rearrested on Eve of the Anniversary of the November 2019 Uprising

Call for the release of political prisoners until the end of COVID-19 pandemic Simultaneous with the anniversary of the November 2019 uprising and fearful of...
Read more
Statements

In the early hours of Wednesday, November 11, 2020, on the eve of the anniversary of the November 2019 uprising, defiant youth targeted three...
Read more
Statements

Anniversary of the November 2019 Uprising

Trans-Atlantic Summit Holding Iranian Rulers Accountable for Crimes Against Humanity Maryam Rajavi: The uprising in November 2019, was not a fleeting meteoroid. Rather, it was a...
Read more