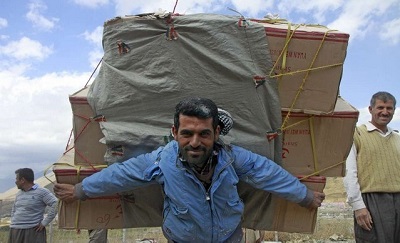 Four Kurdish porters were arrested last week in the border area of Banneh (western Iran) and subsequently pushed down into the valley by agents of the clerical regime.

One of the porters by the name of Azad Ghassemi, father of a small child, got killed and the three other porters were badly injured. Two other porters who had witnessed this murder were also arrested and taken to an unknown location.

The regime officials have threatened the families of the six porters to refrain from all forms of dissemination of the news and information about this crime.
Five young porters, 18-27, lost their lives on January 28 and 30 in the villages of Piranshahr and Sardasht (Iranian Kurdistan) when they got trapped in the freezing storm and avalanche. A number of other porters were injured and at least two of them are in critical conditions.

The shocking death of these youths is but a small part of the Iranian regime’s record of corruption and crimes. The clerical regime has plundered the Iranian people’s wealth and squandered the country’s assets on nuclear projects, and export of terrorism, fundamentalism and war to the region. It has destroyed the country’s economy and brought about poverty, unemployment and inflation for the people of Iran.

An increasing number of people have had to become porters as a consequence of the destruction of the Iranian economy and rampant unemployment. Ten-year-old children, elderly men and women, as well as students and university graduates are among these porters. They are in constant danger of being directly targeted by the State Security Force. Avalanches, drowning in the rivers, freezing in the cold, and falling into deep valleys, are among other dangers of this job.

In the 8-month period between March and November 2016, at least 70 Kurdish porters lost their lives in the border areas as a result of the SSF shootings. Dozens of others have become wounded.

Mr. Ahmad Shahid, the former UN Special Rapporteur on human rights in Iran, noted the systematic killing of porters in one of his reports and underlined the fact that the regime’s laws criminalize the activities of these porters and consider them punishable by several months of imprisonment or cash fines which are equal to the price of the items that are confiscated from them. The UNSR received reports that border guards shoot the porters and in this way, dozens of porters and their horses are killed or wounded every year.

These young destitute porters are gunned down or killed while the clerical regime, namely Khamenei, the IRGC, as well as the security and intelligence agencies, manipulate, facilitate and organize contraband deals such as smuggling of narcotic drugs, contraband goods, trafficking of young women and girls, etc.

Habibollah Haghighi, head of the Central Staff of Combatting Smuggling Goods and Foreign Exchange, said that every porter receives between 30 to 50 thousand toumans for every round of carrying loads.

Hossein Ali Haji Deligani, Majlis deputy, pointed out that the volume of contraband deals in the country is $25 billion which is three times the country’s construction budget. According to Haji Deligani, the smuggling of goods and foreign exchange has led to the unemployment of 800,000 people. (The state-run media, June 19, 2016)

So long as the anti-human and anti-Iranian clerical regime rules the country, the people of Iran will experience only oppression. The only way to do away with so much pain and suffering, is the unity of all strata of the Iranian people to topple this medieval and criminal regime.

The Secretariat of the National Council of Resistance of Iran
February 1, 2017