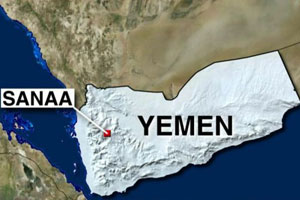 NCRI – According to reports that have recently reached the Iranian Resistance, last June, Khamenei ordered the terrorist Qods Force (QF) to speed up the plan for occupation of Sanaa and to control Yemen by the Houthis. This measure followed the escalation of crisis in Iraq and the occupation of large swathes of that country by ISIS and the establishment of an international coalition in this respect. Khamenei had stated that since U.S. is preoccupied with ISIS and Iraq, as well as the nuclear talks, it is prone to overlook the Iranian regime’s intervention in Yemen, the reports said. He stressed that this opportunity may be used by the regime to spread its influence to Yemen and thus overshadow the problems it faces in Iraq.

1. On July 12, 2014, speaking to a group of QF commanders, IRGC Brigadier General Esmail Qa’ani, deputy QF commander, announced a new phase of operations by Ansarullah in Yemen. With this operation, we will place Saudi Arabia in a vulnerable position, he elaborated. These statements that were posted in a classified IRGC bulletin followed a series of military preparations and training of the Houthis in Iran, Yemen and Lebanon.

2. As Ansarullah entered Sanaa, regime’s foreign ministry’s assistant for Arabia and Africa Hossein Abdollahian noted in his remarks to a group of foreign ministry officials: “Soon, we are going to witness victories in Yemen and with the least expenditure, the Islamic republic will reap great achievements in Yemen. The future Yemen will enjoy Iran’s all out support.”

3. Based on sources inside the regime, the National Council of Resistance (NCR) issued a statement on October 12, 2014 disclosing: “Khamenei has emphasized that ‘the Iraq, Syria, Lebanon and Yemen axis’ is crucial ‘for the Islamic Republic of Iran and there should be no retreat in this regard’… It is through this ring that ‘we can surround the rest of the Arab countries, especially Saudi Arabia and Jordan,’ and put pressure on countries such as Egypt.”

4. On October 19, 2014, Khamenei’s foreign affairs adviser Ali Akbar Velayati, in his meeting with a group of Houthis in Tehran titled “Yemeni scholars and cultural figures”, noted: “In Yemen, Ansarullah should play the very role that Hezbollah is playing in Lebanon.”

5. In January 2015, following the occupation of the presidential palace in Sanaa, a delegation composed of Houthi leaders visited Tehran and met with the Office of Khamenei and the QF, as well as other organs.

6. Concurrent with these meetings, QF wrote in a classified briefing: “The unified and powerful organization of Ansarullah is Iran’s work. They were in Iran for years. For 15 years, Iran has constantly worked with the Ansarullah movement. They have reached this state through our constant support, training and sustenance and intelligence. Moreover, the QF has supported them through Hezbollah and other Arab groups. Ansarullah is completely under Iran’s command.”

7. Following the initiation of operation “Decisive Storm”, a classified QF document stipulated that it is two years now that the IRGC has transferred all sorts of weaponry to the Houthis in Yemen, including a large number of surface-to-surface and surface-to-sea missiles, and thus they have no problem of shortage of missiles and weaponry (this document is in the possession of the Iranian Resistance).

8. Up until the Arab coalition, injured Houthis were regularly transferred to Iran. Including on March 23, the QF airlifted 52 injured members of Ansarullah to IRGC Baqiyatollah Hospital in Tehran. IRGC General Qa’ani personally paid a visit to them at the hospital.

9. Mahan airliner (affiliated with the IRGC) that was forced to turn back from Sanaa on April 29 was carrying to Yemen a number of Ansarullah commanders who had been in Tehran and Lebanon. This same airliner was to transfer a number of Houthis to Tehran under the pretext that they are wounded. For the purpose, a section of Baqiyatollah Hospital had been cleared of other patients.

10. For many years, Yemen’s file was being followed by the QF, but since last year, Khamenei is directly following this file through the QF. The QF employs other governmental organs for this purpose as well. Houthi representatives in Tehran have regular meetings at Khamenei’s Office and Shabankari is responsible for the Houthis affairs in this office.

11. Since the beginning of operation Decisive Storm, regime’s leaders are constantly meeting at the Supreme National Security Council (SNSC) to follow this issue. Saeid Iravani, the political and international assistant of SNSC secretariat, is responsible for coordinating Yemen’s affairs.

12. In this time span, IRGC Major General Qasem Soleimani, QF brutal commander, is following up the war in Yemen from Tehran as QF’s main mission. IRGC Brigadier General Amirian, a Soleimani deputy responsible for the Arabian Peninsula in the QF, is regime’s direct commander in the war in Yemen. He holds the daily staff meetings on this war in Tehran.

13. The QF has also set up a headquarters in Lebanon to intervene in the war in Yemen with cooperation from the Hezbollah. An IRGC classified report reads: “Hassan Nasrallah is wholly behind the war in Yemen and a large section of the work is followed through in Lebanon. He meets with the Houthi commanders and officials in Lebanon… Hassan Nasrallah works with Houthis under Qasem Soleimani’s supervision. They have their headquarters in southern Beirut and QF commanders follow on Yemen through Lebanon.”

14. Once operation “Decisive Storm” began and the routes of sending assistance to Houthis were closed, Tehran continued assisting the Houthis in the following three aspects:
– The presence of some QF commanders on the ground who practically do the planning and direct the Houthis;

– Establishment of essential communication systems so that the Houthis and the IRGC elements in Yemen could be in direct contact with the QF in Tehran to receive guidance;

– Dispatch of further forces and commanders from the Lebanese Hezbollah to help the Ansarullah. Since entry of IRGC elements to Yemen is proving more difficult, regime is dispatching Hezbollah commanders to Yemen through various routes. Some are pulled out of the front in Iraq and transferred to Yemen.

15. Some factions within the regime, especially at the foreign ministry, consider the “Decisive Storm” as a heavy and strategic blow to the regime. A classified report emphasis on several points:

– We just went too far in Yemen. Taking over Sanaa was a good move, but advancing towards Aden was a mistake. When foreign minister of Jordan brought a message of peace from Saudis to Iran and urged Iran not to interfere in Yemen, the QF miscalculated and planned Yemen’s occupation, much like Syria and Iraq.

– This is a strategic defeat in the region… similar to the case in Tikrit, Iraq where forces aligned with Iran were pushed back and U.S. threatened that it would not carry out airstrikes unless the militias are pulled back.

– IRGC cannot takeover all of Yemen with the Houthis. Had the Houthis remained in Sanaa, Saudis wanted to negotiate and we were in a better position. The move to takeover Yemen was a mistake and premature and it led to this confrontation with Iran unprecedented in the past few decades.

– Iran should have played the same way as it did with the Hezbollah in Lebanon. It should have let Mansour Hadi keep Aden. After the end of talks and overture in nuclear discussions, Iran could have gradually advanced in the region… Regrettably, IRGC brothers lack a logical and strategic viewpoint.

– Posting of reports and pictures of Haj Qassem [Soleimani] on the internet was a trap for the IRGC and got the region mobilized against Iran; weakening the forces loyal to Iran. Right now, Iran’s years of investment in Lebanon, Yemen, Syria and Iraq has been hurt.

16. Reciprocally, a classified QF report says: “There is no plan for Houthis to retreat. They are to advance. They have good resources of weaponry and missiles and can withstand. They have 180,000 mobilized forces ready to fight. They have 20,000 strong suicidal elements. Thus the Houthis are the winners and Saudi Arabia will be the loser of this play. Most significant is that after 33 years a revolution similar to the Islamic Republic revolution with the leadership of the supreme leader is taking shape in Yemen.”

17. In the current circumstances and at a time when the Houthis are ruling in Sanaa, regime’s policy at the political scene is to stress on a swift ceasefire in order to have the upper hand in the negotiations. According to classified QF reports, “this situation is unsupportable for the Saudis and the more the situation in Yemen deteriorates, it will be to the detriment of Saudis and the coalition forces will step aside; Saudis cannot have hegemony. Therefore, Ansarullah should be patient”.

Another QF report states: “If a car explodes in the capital of one of the countries in the coalition, that country shall drop out of the coalition.” Some sources state that these reports are to boost the moral and give hope to regime’s forces.

18. In a fake muscle-flexing on April 17, Deputy IRGC Commander Salami noted: “Ansarullah can attack the Saudi navy and confront a Saudi ground assault… Ansarullah have missile and armored capabilities and they have artillery. They almost have a powerful army in the region… If Saudi attacks continue, they [Houthis] would certainly respond by attacking Saudi ground forces and enter the Saudi territory. Surely, the Ansarullah will not be hands tied in face of Saudi attacks.”

By stressing on the above points, as well as many other facts and details, the Security and Anti-terrorism Commission of the National Council of Resistance of Iran emphasizes on the fact that as long as this antihuman regime is ruling Iran, it shall not abandon export of terrorism and fundamentalism and warmongering in countries in the region. Therefore, the sole solution to attain peace and tranquility in the region is to evict the Iranian regime and the forces affiliated with it from the region, especially from Iraq, Syria, Lebanon and Yemen and ultimately to topple this regime in Iran.

Security and Anti-terrorism Committee of National Council of Resistance of Iran
May 2, 2015