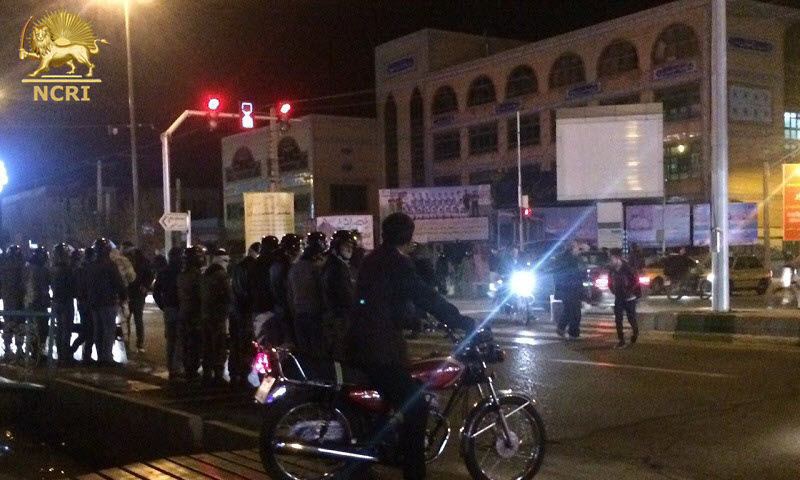 Demonstrations of the Iranian people and the youth continued on Tuesday for the sixth consecutive day in different cities.

In Rasht, protesters throw hand grenades to the Basijis in the alleyways leading to the Sabzeh Maidan.

In Hamedan, the people demontrated with the slogans of “Khamenei is a murderer, his rule is void”, “death to Khamenei”, and “Khamenei shame on your conspiracy” and took control of the Basij station called Shafi’i.

In Islamabad Gharb, the repressive forces attacked protesters and arrested some of them.

In Isfahan’s Foolad Shahr, a demonstration with the slogan of “Iran must know, the movement is continuing” was held.

In Tabriz, scores of Revolutionary Guards, Bassij militias, and anti-riot guards, packed on the central streets of the city including the Clock Square, were deployed. Confrontation broke out between the courageous people and mercenaries, and the people defend themselves with hand grenades.

In Ghahderijan (Isfahan province), families of detainees called for the release of their detainees in front of the IRGC and other repressive organs. Last night, the Guards and the criminal Basijis martyred 10 young protesters by direct shooting.

In Behbahan, courageous youth burned down the seminary of the mullahs as a sign of disgust from the corrupt and criminal mullahs.

The courageous youth of Kashan protested with the slogan of “Cannons, tanks, mullahs must get lost!”

Following the gathering of Gohardasht people in Karaj, the Basijis of the Jahangir area brutally attacked them.

The regime’s murderers in many cities are demolishing cars, shops and personal belongings of people in order to blame it on the protesters and to tarnish their images.

Secretariat of the National Council of Resistance of Iran
January 2, 2018

Previous articleProtests in Iran Differ From 2009 as Demonstrators Call for Regime Change
Next articleRouhani’s Remarks, in an Appeal to the French President, Reflect His Panic Over the Popular Uprising and the Popularity of the PMOI