Iran: Continued Strikes of Workers and Protests by Other Deprived Classes 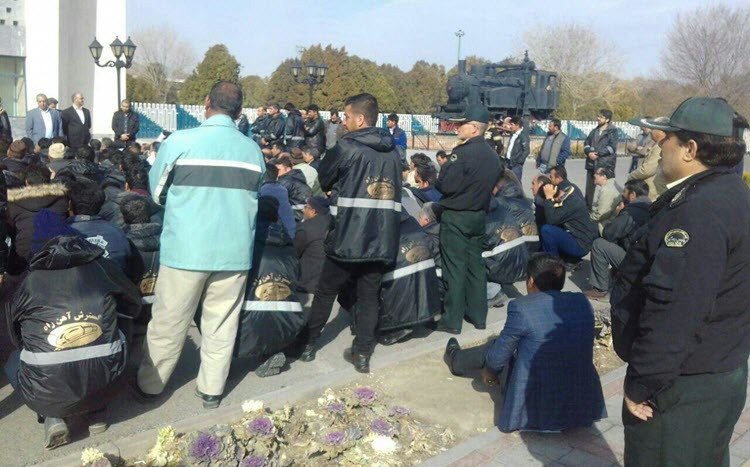 The strikes and protests of the workers, employees and various strata of the people continued on Sunday, March 4, in different cities across the country:

1. Workers of all sections of the Haft Tapeh sugar cane company, including agriculture, factory, equipment, services, and engineering and support, stopped working in protest to non-payment of their demands and gathered in the company's premises. Derakhshani, the factory manager, tried to prevent workers from shutting down the various parts of the factory, but he failed.

2. Ahvaz steel workers continued strike for 12 days in spite of the arrest of a group of their colleagues and threats from the regime prosecutor's office. Farhad Afsharinia, chairman of the Khuzestan judiciary, blamed shamelessly the arrest of the workers on their illegal and without permit gatherings. "The company is bankrupt, and various government agencies, banks and the private sector are also creditors," he said in collaboration with the owner of the factory, a large-scale government-affiliated looter.

3. A group of workers from the Heavy Equipment Manufacturing Company (HEPCO) in Arak came to Tehran after the failure of fulfillment of promises made by Rouhani Minister of Labor last month and the non-payment of their eight months of salary and insurance rights, and protested in front of the privatization company. About a thousand workers from HEKKO protested in the streets of Arak last month.

With 42 years of experience, Hepco is the largest road equipment manufacturer in the Middle East that has been put on the verge of annihilation, and its production dropped from 3,000 units to 100 machines due to the treacherous policy of the clerical regime. The employment capacity of Hepco has also dropped from 3,000 to 900 people, with no salary being paid to them.

4. A group of Hashtgerd residents gathered to protest the usurpation of their lands. These lands have been handed over to the regime's governorate and the "Veterans" state foundation.

5. Administrative staff of Babol Education department stopped working and went on strike in protest of not paying one year of their overtime. Work

6. Ahab employees (one of the Tehran subway line 6 contractors) gathered in protest to non-payment of seven months of their salary and arrears.

7. The Tabriz railway workers gathered to protest non-payment of their unpaid salaries. The workers carried a banner reading: "We want our legal rights."

8. The workers of the Sazeh Kavir Electric Company in Yazd gathered against the company in protest of the failure to pay their six months' salary.

9. The green space workers of the Sarbandar municipality (Bandar Khomeini) in Khuzestan province gathered for the second consecutive day in protest of the failure to pay their salaries in front of the municipality.

10. The workers of Kisson Company in the second phase of the Bafgh to Zarrinshahr Railroad Project, protested for the sixth day in a row at the Varzaneh Station of Isfahan.

11. A group of looted people of Valiasr credit union of Rabat Kareem and Baharestan gathered in front of the regimes Parliament in Tehran to protest the uncertainties of their deposits.

12. On Saturday, March 3, hundreds of unemployed youths in the villages of the Chaghamish district of Dezful and the Dimcheh district of Shooshtar, that are adjacent to Karoun Agro-industry company, gathered for the second day in front of the company. Attack of anti-riot guards on protesters who chanted "Death to unemployment" led to confrontation. The agents of the repressive forces arrested one of the protesters and arrested four people with tear gas and shooting in the air. The repressive forces subsequently closed off the roads of villages leading to the company. The Karoun Agro-Industry Company has been promising since 1981 to hire landowners by leasing more than 30,000 hectares of land in the area, but never fulfilled its promise. With the assignment of company to government contractors and the hiring of non-native people with low wages, unemployment and poverty have intensified in the region.

The Karoun Agro-Industry Company, located in the cities of Shushtar, Gatvand and Dezful, with four decades of operation, previously employed 17,000 workers, but now the number of workers has fallen to less than two thousand due to the destruction of the country's economy.