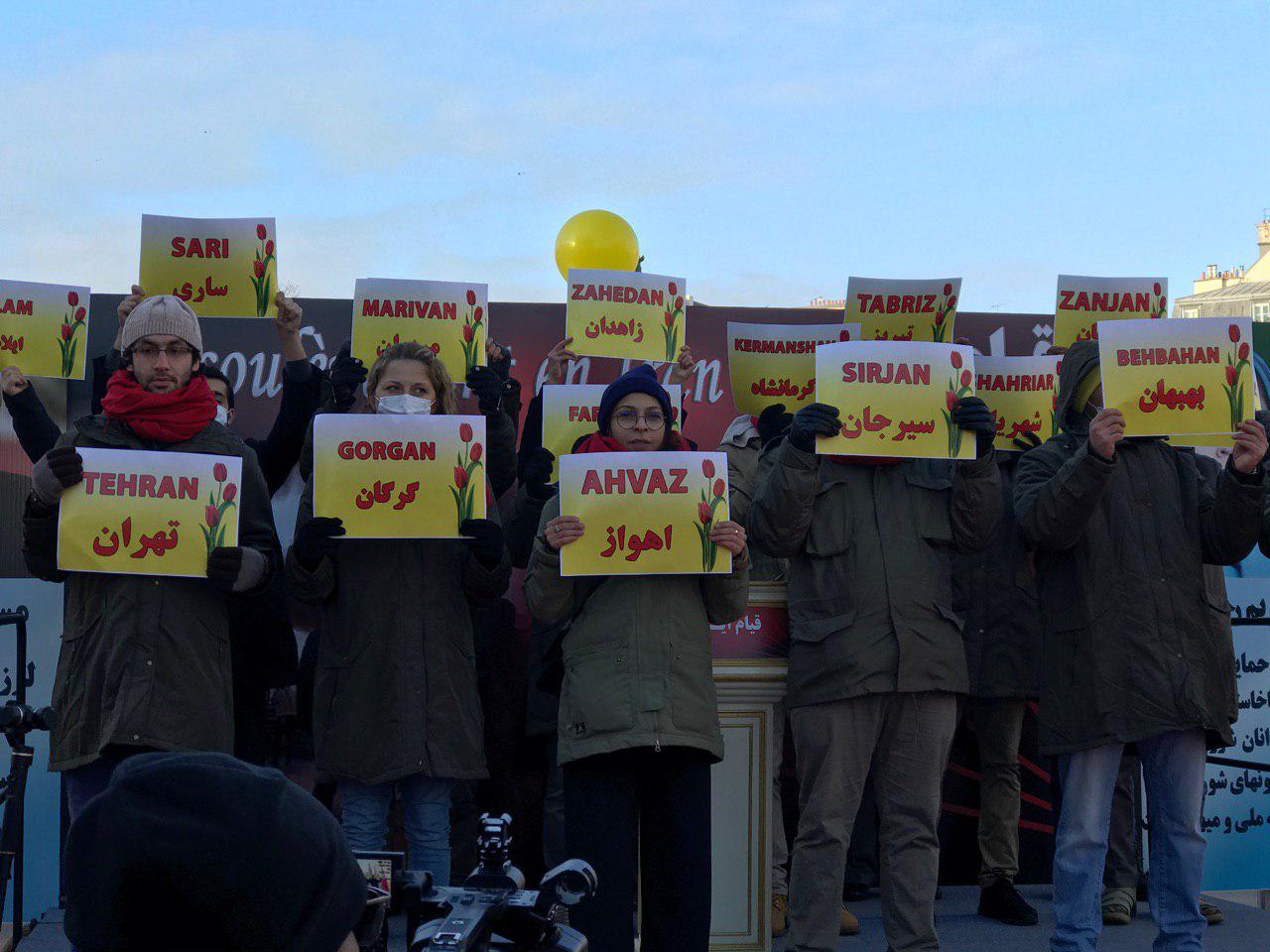 A group of youth supporters of MEK, hold placards with names of various cities that were the scenes of mass protests during the recent uprising in Iran. A rose flower on every placard, indicates solidarity with the fallen heroes in that city- Terocadero Sq, Paris, December 2, 2019

Terrified of the continuation of the Iranian people’s nationwide uprising, the mullahs’ regime continues the extensive wave of arrests across the country. The number of those arrested since the start of the uprising has surpassed 12,000. So extensive is the scale of arrests that prisons are overflowing with detainees, and a large number of those arrested are being kept in government buildings, and even elementary and grade schools.

According to the state-run media, the regime officials reported the arrest of 1,000 people in only seven provinces just in the past two days. On November 30, Mohammad Javad Kolivand, Majlis (Parliament) Deputy from Karaj and the head of its Internal Committee, spoke of more than 400 arrests in Alborz Province. The State Security Force (SSF) commander in Hormozgan Province reported the arrest of 31 “main leaders in cyberspace”, and SSF commander in East Azerbaijan spoke of the arrest of 48 “main actors” and 22 “saboteurs” in the uprising.

On December 1, SSF commanders reported the arrest of 240 protests “leaders” in Kermanshah, 97 in Pardis, 50 in Tehran, 25 in Kurdistan, 32 in Isfahan and 26 in Najafabad and Yazdanshahr.

JeanFrançois Legaret @Mairiedu1 Mayor of #Paris: "the Iranian people are oppressed& they have no other resolve than to revolt. The number of victims increases day by day &over 12000 #protesters have been arrested. #IranProtests #StopIranBloodshed #FreeAllProtesters pic.twitter.com/waM7uobOMX

The number of daily arrests across the country is much greater. The arrests made by the Intelligence Ministry, the IRGC and its Intelligence Organization, and other suppressive agencies must be added to the figures given by the SSF. This is while the ruling religious dictatorship is trying to conceal the actual number of those killed and arrested.

By describing the detainees as those who have waged war on God and are seditious, the regime officials are setting the stage for their execution.

Unfortunately, the int’l community has not responded properly to the crimes against humanity currently going on in #Iran. Crime against humanity during the November 2019 uprising is being led by the same officials responsible for the 1988 massacre. #IranProtests