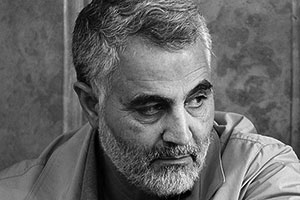 NCRI – According to reports from inside the Iranian regime’s Revolutionary Guards Corps (IRGC), Qassem Suleimani, the notorious commander of the terrorist Qods Force, has suffered severe shrapnel wounds, including in the head, while at Aleppo’s southern front two weeks ago.

Qassem Suleimani’s vehicle that was there for him to oversee an operation by the revolutionary guards and a number of hired forces was targeted by the Free Syrian Army severely injuring Suleimani.

Due to the severity of his wounds he was immediately transferred by an IRGC helicopter to Damascus and after receiving preliminary treatment was transferred to Tehran. He was hospitalized at IRGC Baqiyatollah Hospital which is in Tehran’s Mollasadra Street and so far has undergone at least two surgeries.

He is in the ICU (Section C7) of this hospital on the seventh floor and is not allowed any visitors. A group of doctors headed by Dr. Gholamreza Farzanegan, a neurologist and brain specialist, oversees his condition. Dr. Alireza Jalali, head of the Baqiyatollah Hospital directly follows up Soleimani’s condition. The head of Section C7 is Dr. Amir Davoudi and IRGC element Sheikhi is the coordinator of Section C7.

The IRGC counterintelligence section has imposed severe restrictions to prevent any leakage of information of Soleimani being wounded and has ordered all hospital personnel to refrain from answering any questions in this regard. The Iranian regime is worried that the news on Soleimani’s injury would cause a complete collapse of moral of the IRGC forces and the militias in Syria. Even now, the revolutionary guards are quite frightened and anxious due to the large number of casualties they have suffered in the past couple of months in Syria.
As the revolution of the Syrian people is soon entering its sixth year, the supreme leader of Iranian regime Khamenei and the IRGC are facing consecutive defeats despite tapping all their military, economic and political resources in the war against the Syrian people and their revolution.

Corpses of the revolutionary guards are being transferred to various Iranian cities on a daily basis while other corpses are left behind in the liberated areas of Syria.
These consecutive defeats that have taken on an escalating trend since winter 2014, has compelled the Iranian regime to seek Russia’s help to prevent a swift overthrow of Assad.

It is futilely hoping that through employing the aerial firepower of Russia, using its Revolutionary Guards along with its hired militias such as the Hezbollah, Iraqi mercenary militias, Afghan and Pakistani mercenaries, and the remainder of Assad’s army, it would be able to crush Syria’s revolution.

However, after the most intense bombings and massacre of thousands of civilians in the past couple of months, the Iranian regime has nothing to show for it except an unprecedented increase in the number of Revolutionary Guards’ corpses, including many IRGC brigadier generals.