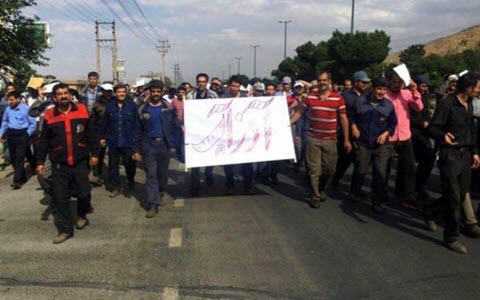 NCRI – The CEO of Iranian company Azarab has been detained for unknown reasons, while hundreds of workers from equipment manufacturers Azarab and Hepco in Arak, central Iran, are still on strike over unpaid wages.

According to the regime-affiliated Iran Labor News Agency (ILNA), Mohammad Taqi Abaei Hezaveh, a representative of the Cooperation, Labor, and Social Welfare Ministry, said: “As the Justice Department has issued the order for detention of Azarab factory’s CEO, there is no further information available.”

Kioumars Azizi, the police commander for Markazi province, said that Azarab’s CEO had been arrested on September 24.

He said: “The reason behind the detention is soon to be announced by judicial officials.”

It seems likely that his arrest was designed to end the workers’ strike, placate the protesters, and perhaps even punish him for causing the protest by not paying the workers.

Abolfazl Pourvafaei, , the head of the Center for Coordination of Islamic Labor Councils in the central province, told ILNA: “Azarab’s CEO was one of the elements of recent days’ unrest in the province. After Azarab workers held a protest assembly and its subsequent unpleasant events, Azarab’s officials settled 18 million rials (roughly $536) wages of each worker; whereas they could have done that before the outbreak of protests.”

He continued: “Therefore, it is believed that the unpleasant events that endangered the province’s security were the outcome of mismanagement by Azarab’s CEO.”

Of course, it is strange to describe the anti-riot police forces as the people put in danger by the protests when they attacked the protesters on no less than two occasions.

On September 19, the police stormed the protest assembly and beat Azarab and Hepco workers and the next day, they stormed Azarab using tear gas and batons to attack the strikers.

It is unclear how many workers were wounded and how many of them had to be taken to the hospital.

Trade unions across Iran have condemned the actions of the police.

Azizi defended the brutal actions of his force and regarded their beating of unarmed protesters to be a means of preserving “law and order”.

The striking workers have ended their protests but are far from back to work.

On September 25, Hezaveh said: “Azarab and Hepco workers are present at their workplace but in protest of their unpaid wages have stopped working and are laying around the industrial compounds.”

The secretariat of the National council of resistance of Iran, in a statement on September 20, 2017 stated:

The Iranian Resistance hails the brave workers of the Azarab and Hepko factories in the city of Arak – central Iran, who have been protesting bravely for their rights in recent days, and calls on the general public and the youth to help them in solidarity. The Iranian Resistance also calls on the international organizations defending the rights of workers to support the striking and protesting workers in Iran and to take effective action to release the detained workers and to address their demands