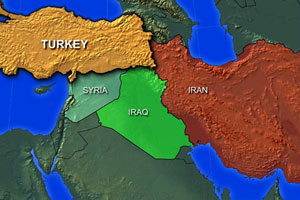 NCRI – Following remarks by Ali Khamenei, the Iranian regime’s supreme leader, on February 8 and 18, which hardened the conditions for reaching an accord with P5+1, the clerical regime has dispatched its First Vice-President and Foreign Minister on separate trips to Iraq to pave the way for further circumvention of sanctions by stepping up illicit export and import and the unlawful transfer of money via Iraq in breach of Security Council resolutions.

“I believe that even if we agree to the demands that they dictate on the nuclear issue, still the sanctions will persist since they oppose the revolution itself,” Ali Khamenei said on February 18.

Concerned that abandoning the nuclear weapons project would imperil the status of Vali-e faqih and lead to the downfall of the regime in its entirety, Khamenei is working to dodge signing an accord for as long as possible.

Ali Tayebnia, the Iranian regime’s Minister of Economic Affairs and Finance, who had accompanied Eshaq Jahangiri, the regime’s First Vice-President, in his February visit to Iraq, stated on February 17: “The volume of transactions between the two countries will grow from $12 billion to $20 billion.”

He added, “Iraq’s Minister of Economic Affairs promised to remove some existing restrictions to pave the way for an increase in the economic transactions,” the official news agency IRNA reported.
Similarly, the regime’s Deputy Minister of Industry, Mines and Trade stated on February 19 that the volume of business transactions must reach $25 billion per year, according to state-run Mehr News Agency.

This is while many of the illicit goods that are being traded through Iraq and the pertaining amount has not been calculated into these figures.

Among the main topics he discussed in his visit was to raise the amount of dollars that enter Iran via Iraq. Until now, Mahan Company airplanes have been transferring dollar consignments belonging to the Revolutionary Guards (IRGC) from Baghdad and Sulaymaniya airports to Iran.

During Zarif’s visit, an increase in the volume of these transfers from these two airports and other Iraqi airports was discussed.

Concurrently, the head of Iran’s National Standards Organization said, “According to the memorandum of understanding signed between the two countries, inspection and control of Iranian goods at the border will be eliminated and the inspections will be carried out at the source of the trip to the consent of the Iraqi side” (IRNA News Agency – February 24). This would give the regime a free hand in the transfer of illicit cargoes, including weapons.

Considering the long border between Iran and Iraq and given the extensive presence of the terrorist Qods Force in Iraqi territory, the Iranian Resistance calls on the UN Security Council and the committee supervising the council’s sanctions, as well as on the U.S. government and the European Union, not to allow the sanctions imposed on the clerical regime for its nuclear weapons program, terrorism, and violation of human rights to be easily trumped through Iraq, as such an outcome would embolden the regime to continue with its policies, especially in acquiring a nuclear bomb.

Secretariat of the National Council of Resistance of Iran
March 1, 2015

Eight countries including Albania aligned themselves with the European Unions' blacklisting of the terrorists organizations and individuals, including those affiliated with the Iranian regime, on February 25, 2020. The Council of the...
Read more
Statements: Terrorism & Fundamentalism

Gjergji Thanasi, an agent, whose services to the Iranian regime’s embassy and its intelligence station in Albania, had been previously exposed by the Security...
Read more
Statements: Terrorism & Fundamentalism

Javad Zarif is culprit in all the Iranian regime's, including the massacre of 1500 protesters Written by Secretariat of the National Council of Resistance of...
Read more
Search