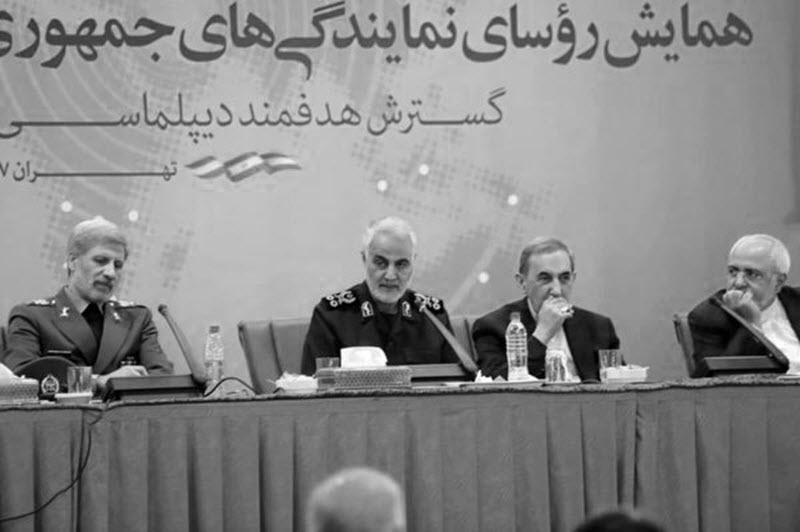 According to reports from inside the regime, the main part of the annual gathering of ambassadors and representatives of the mullahs’ regime in foreign countries held in Tehran in the last week of July was to brief them about the arrested diplomat terrorist in Germany, how to confront Iranian resistance at the international level, and increasing morale of the diplomats to prevent their defection.

In this year’s gathering of the representatives, in addition to Khamenei, Rouhani, Jahangiri and Zarif, who would normally visit them every year, Qods Force commander Soleimani, Minister of Intelligence Mahmoud Alavi, Interior Minister Rahmani Fazli, Ali Larijani, Speaker of the Majlis, Sadeq Larijani, the head of the Judiciary, Ali Akbar Velayati, Khamenei’s advisor, Defense Minister Amir Hatami, Ali Akbar Salehi, the head of the Atomic Energy Organization, Abbas Salehi, the Minister of Culture and Islamic Guidance, Abuzar Ebrahimi Turkman, chairman of the Organization of Islamic Culture and Communication, and a number of other leaders of the regime participated and gave speeches.

One of the goals of these meetings was coordination between the Ministry of Foreign Affairs, the Ministry of Intelligence, the Qods Force, and the agencies involved in the export of extremism in the demonization campaign, spying and paving the ground for terrorist acts against the PMOI and the Iranian Resistance.

Some overseas representatives of the regime expressed concern about the approach of governments and foreign political and media circles to the involvement of regime diplomats in a “serious terrorist act” and “flagrant violation of the Vienna Convention”. Alavi and Zarif briefed them on how to “deal with Assadi’s case” and emphasized that with “psychological warfare and the pumping of false information,” previous and future measures against the hypocrites (PMOI) must be made digestible. In this regard, the regime’s representatives were ordered to activate their relations with the intelligence and security organs of the host countries.

According to an internal report of the IRGC, a blow to the PMOI is “in the political, military, security and intelligence priority of the regime,” and targeting them on their journeys and trips is in the agenda. A statement of the Anti-Terrorism Committee on August 17 said that the Ministry of Intelligence and the Qods Force were instructed to evaluate terrorist acts against the Mojahedin with the use of non-Iranian mercenaries.

Another topic discussed at these meetings was coordination of the Foreign Ministry and foreign representative offices with the Revolutionary Guards and the Qods Force in terrorist and warring interventions in the region, including in Iraq, Syria and Yemen. Representatives of the regime overseas received instructions on how to justify these measures to the government, parliament, parties and the press in their area of mission.

At these meetings, the regime’s leaders tried to inspire diplomats who are extremely worried about the uprising and new sanctions on the future of the regime. The Supreme Security Council of the regime is concerned about seeking asylum by some of the regime representatives in European countries.