Iran Regime’s Senior Mullah Says, Protesters Are Rebels and Must Be Executed 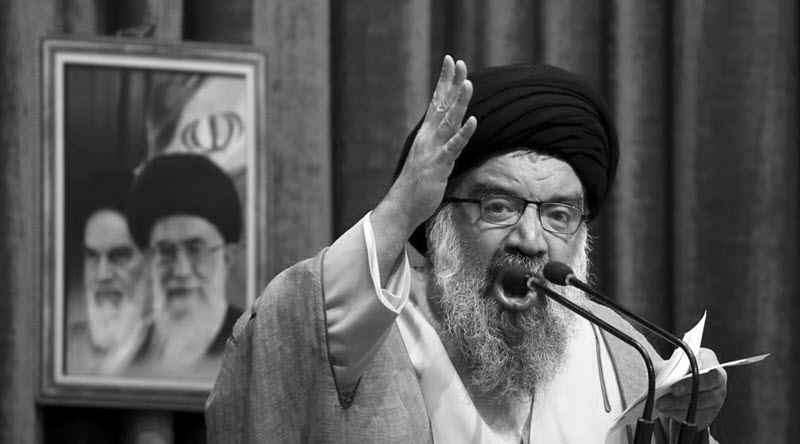 The more we can, the more missiles we build and increase their ranges and support Hezbollah

Following the ongoing protests by the public and the youth on February 1 on the eve of the 40th anniversary of the rule of religious fascism in Iran, Khamenei, the Supreme Leader of the regime, dispatched Mullah Ahmad Khatami, member of the board of the regime’s Assembly of Experts to Tehran Friday prayer to intimidate the rising people and protesters.

Khatami, scared of the hatred of the people from the regime and its leaders, called the dictator “the just ruler of Islam” and stated: “I said once in the sedition of 2009 and I am saying it again now that in our jurisprudence, the one who comes to the streets against the just ruler of Islam, sets fire and kills people, he is an insurgent against Islam and in our jurisprudence his sentence is death. We must confront the rioters, be the students, or clerics or else …You must be angry with the leaders of the rioters and deal with them categorically” (Fars, IRGC News Agency – February 2).

Mullah Khatami, face to face against the international community to halt the regime’s ominous missile programs, ridiculously attributed missile activities to the Qur’an and said: “On the orders of the Qur’an in the field of deterrence, we will make missiles as many as we want and we will increase its range as much as we want, and we do not negotiate this with anyone and do not allow any government to interfere. The French foreign minister and others will have to remove the earbuds from their ears, and if they want to negotiate this issue, we will answer them in advance.”

While the regime’s warmongering machine and export of terrorism falters every day, Khatami emphasized on the continuation of the export of terrorism and the support for terrorist groups, and said: “Iran has not and will not give up this support. We regard Hezbollah as a noble organization and a defender of the homeland. “

The time has long passed for Khamenei and Khatami’s scary cries, and the people and risen young people are determined to overthrow the religious fascism ruling Iran. The regime of Velayat-e faqih will be buried with all its bands forever and the people of Iran, region and the world will get rid of it.

Secretariat of the National Council of Resistance of Iran
February 2, 2018

Previous articleIran: Reaction of a Senior Official to Slogan “Neither Gaza nor Lebanon, My Life Is for Iran”
Next articleIran: The Nationwide Protests, on the Eve of the Anniversary of 1979 Revolution