IRAN: The Mullahs’ Head of Judiciary Threatens Protesters to Execution and Decisive Action in the Face of Popular Uprising 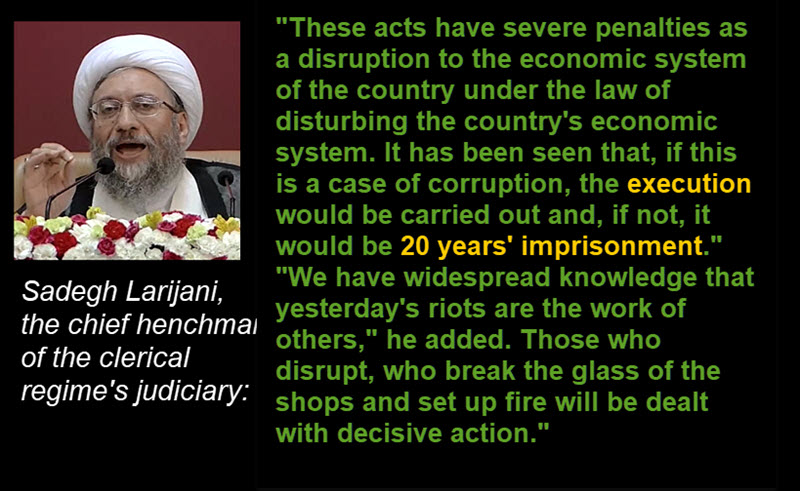 Mrs. Rajavi: Call for immediate action by the Security Council and condemning these threats by the United Nations

Sadegh Larijani, the chief henchman of the clerical regime’s judiciary, on Tuesday, June 26, on the third day of the strike of the Bazaar and popular protests and in fear of spreading these protests, threatened the perpetrators of the “riots” of Tehran and “disrupters in the economic system” to decisive action and execution and said:

“These acts have severe penalties as a disruption to the economic system of the country under the law of disturbing the country’s economic system. It has been seen that, if this is a case of corruption, the execution would be carried out and, if not, it would be 20 years’ imprisonment.” “We have widespread knowledge that yesterday’s riots are the work of others,” he added. Those who disrupt, who break the glass of the shops and set up fire will be dealt with decisive action.”

The target of this criminal mullah by referring to “those who disturb the economy of the country” is those protesters and strikers whose entire life has been destroyed by this regime. Meanwhile, the Iranian people’s capital has been plundered by Khamenei, the Revolutionary Guards, and other leaders and gangs of the regime, who have made the people’s lives miserable today.

At the same time, Abbas Jafari Dolatabadi, the Tehran criminal prosecutor, announced the arrest of a large number of protesters and decisive action against them, refusing to release them, saying: “Last night, a large number of rioters in the market were identified and arrested … These defendants, like the defendants in the January and March (2018) will not be released until their trial. The authorities will not give in in dealing with the riots and insecurities “(ISNA news agency – June 26).

Mrs. Maryam Rajavi, president-elect of the Iranian resistance, with regards to today’s statements by Mullah Larijani, on the death sentence and decisive action against the protesters, said that these statements also reflect the inhumane nature of Larijani and his Supreme Leader, Khamenei, about the uprising of the Iranian people. She emphasized that these statements are in flagrant violation of the Universal Declaration of Human Rights and many other international conventions, such as the Convention on Civil and Political Rights, and said the United Nations Security Council should act promptly. Mrs. Rajavi urged the Security Council, the United Nations Human Rights Council and other international human rights organizations to strongly condemn the threats of the head of the clerical judiciary for execution of the protesters and to act to release the detainees.

Secretariat of the National Council of Resistance of Iran
June 26, 2018