NCRINational Council of Resistance of Iran
EN FR DE IT AR ES AL
HomeStatementsIran: The Third Day Of The Uprising Of The People Of Khuzestan...
StatementsStatements: Iran Protest

Iran: The Third Day Of The Uprising Of The People Of Khuzestan In Ahvaz, Shush, Karkheh, Susangerd, And Kut-abdollah 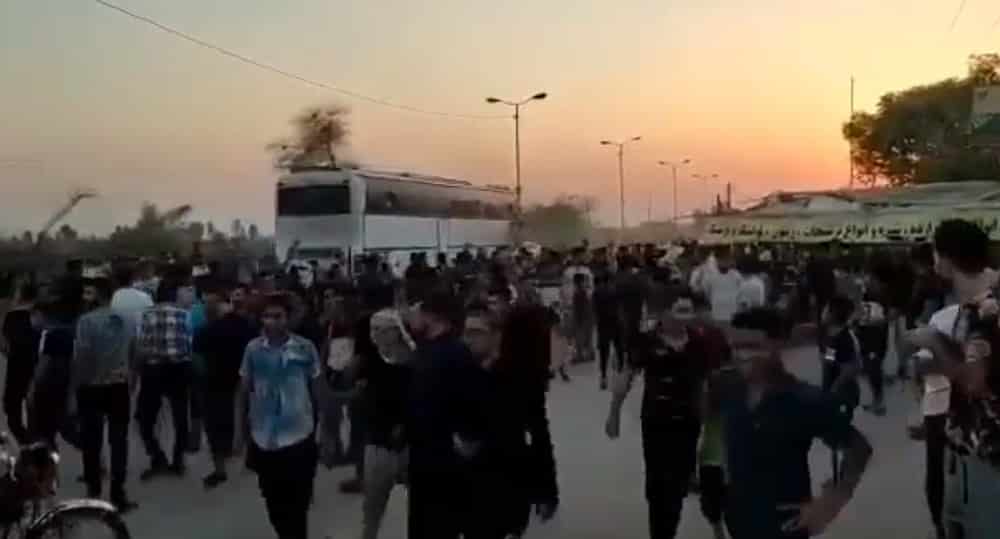 Iran protests for water – No. 3

Thousands took to the streets in Kut-Abdollah (near Ahvaz). The IRGC special units entered Kut-Abdollah, and the State Security Forces (SSF) blocked all roads leading to the city. Defiant youths blocked the Andimeshk-Ahvaz Highway in the Shavur district of Shush. The demonstrators closed the main road to the city by setting fires. They also blocked the Hamidabad Bridge at the entrance to the city.

Following the onslaught of the repressive forces, the angry youth set fire to the police kiosks and a Basij vehicle and took control of the streets. The SSF has requested reinforcements.

The people of Susangerd protested by closing the main road to Ahvaz. Defiant youths blocked the Ahvaz highway in the Jafir area. The people of Karkheh city in Shush and the residents of Kut-e Seyyed Naim in Ahvaz also joined the uprising against water shortage.

Mrs. Maryam Rajavi, the President-elect of the National Council of Resistance of Iran (NCRI), saluted the arisen people of Ahvaz and Khuzestan Province who, in dire need of water and freedom, have come to the streets. Mrs. Rajavi called on all youths to rush to the aid of the people of Khuzestan, especially those wounded. She said that opening fire on unarmed residents and the martyrdom of the brave sons of the people in Khuzestan, again demonstrated that as long as the plundering mullahs remain in power, poverty, unemployment, and disease will continue. The mullahs deny the people water, power, bread, housing, and vaccines to provide for the unpatriotic nuclear and missile projects and their warmongering in the region.

Secretariat of the National Council of Resistance of Iran (NCRI)
July 18, 2021