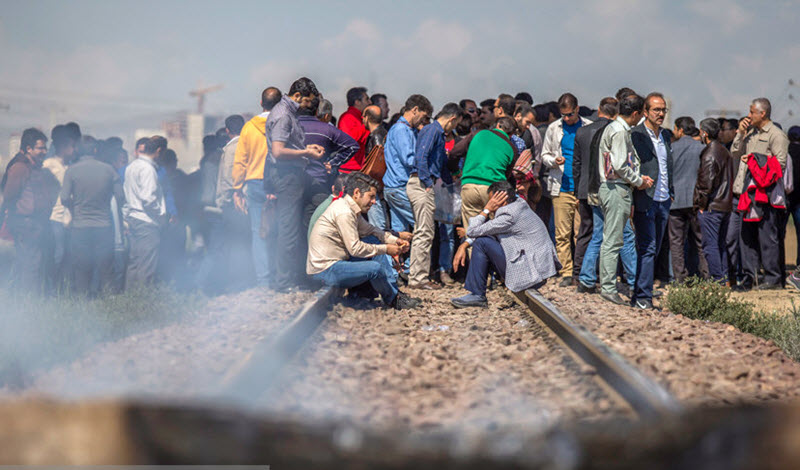 On Wednesday, May 16, workers from Hepco Company, a heavy machinery manufacturer in the central city of Arak, held a protest for the fourth consecutive day. They chanted slogans against the regime’s officials.

As in previous days, protesters blocked the north-south rail link by holding a sit-in on the rail road.

They demanded payment of their overdue salaries, benefits and guarantees for job security.

In Tehran, metro personnel at Tehran-Karaj metro line stopped their daily work to protest against non-payment of their salaries and arrears. At the Chitgar metro station, people waiting for arrival of trains chanted “Death to the dictator.”

In Ahvaz, in southwestern Iran, rice farmers continued to gather in front of the city’s Governorate to protest a ban on rice cultivation in the summer that would create much difficulty for them.

Residents of the village of Mehdi-abad, near the central city of Qazvin, forced the regime’s security forces and authorities to flee from the area. The authorities have been trying to take over the land that they were working on.

In the western city of Baneh, shopkeepers continued to protest against the regime’s hollow promises on opening border crossings and reducing customs tariffs.

On Wednesday, in the central city of Isfahan, a group of merchants in Naghsh-e Jahan bazaar went on strike to protest the recent rise in the dollar exchange rate. A similar protest was held by merchants in the southern city of Bandar Abbas, Tarikeh bazaar in the western city of Kermanshah, and in Qeshm.

On the same day, in the city of Isfahan railway workers went on strike. The protesting workers have not received their salaries for the past four months and have been deprived of healthcare benefits for more than a year.

In previous days, similar protests were held by railway workers in the cities of Mashhad, Islamshahr, Zanjan, Tabriz, Damghan and Bafgh.

Secretariat of the National Council of Resistance of Iran
May 16, 2018