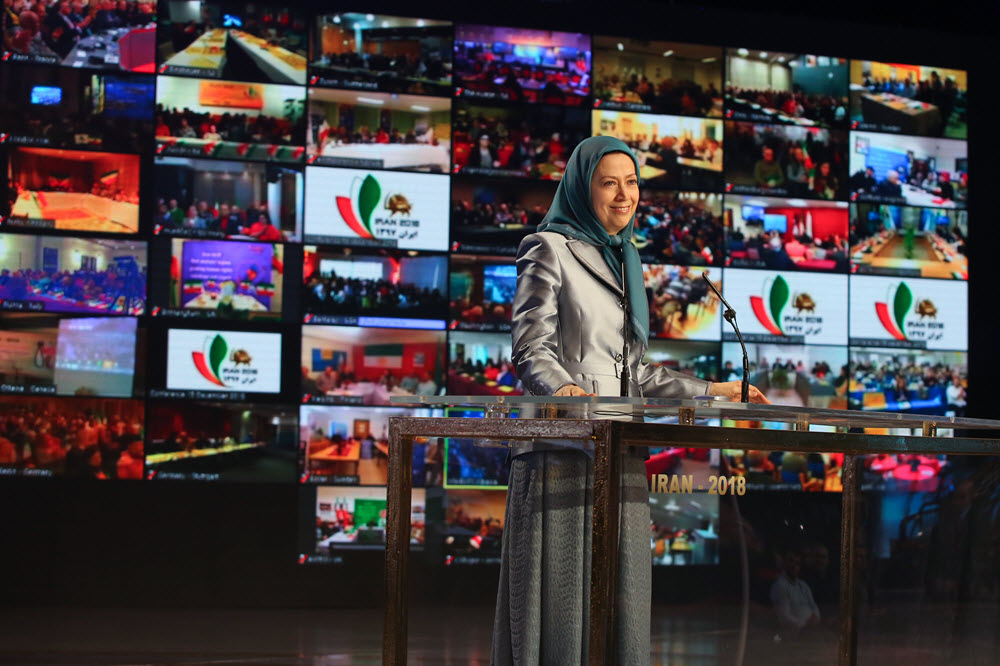 Maryam Rajavi: Terrorism is the regime’s strategy to thwart its own overthrow, and all its leaders are involved
The Revolutionary Guard Corps, the Ministry of Intelligence, and the state propaganda machine must be placed on the US FTO list and the EU terror list, the regime’s financial lifelines blocked, the dossier of the regime’s crimes against humanity be referred to the UN Security Council and its leaders brought to justice

Referring to the Iranian regime’s terrorist activities in 2018, the President of the National Council of Resistance of Iran said, “The regime’s recourse to terrorism is not a transient or tactical reaction, but a strategic outlet for it to confront the uprisings and its overthrow. Today, the regime makes use of terrorism to confront the Iranian people’s uprisings. The arrests and expulsions of the regime’s diplomat-terrorists and terrorists with ties to their embassies show that the regime’s Supreme National Security Council, the Revolutionary Guard Corps (IRGC), the terrorist Quds Force, the Ministry of Intelligence (MOIS), the Foreign Ministry, and the regime’s embassies are all parts of the clerical regime’s terrorist network.” 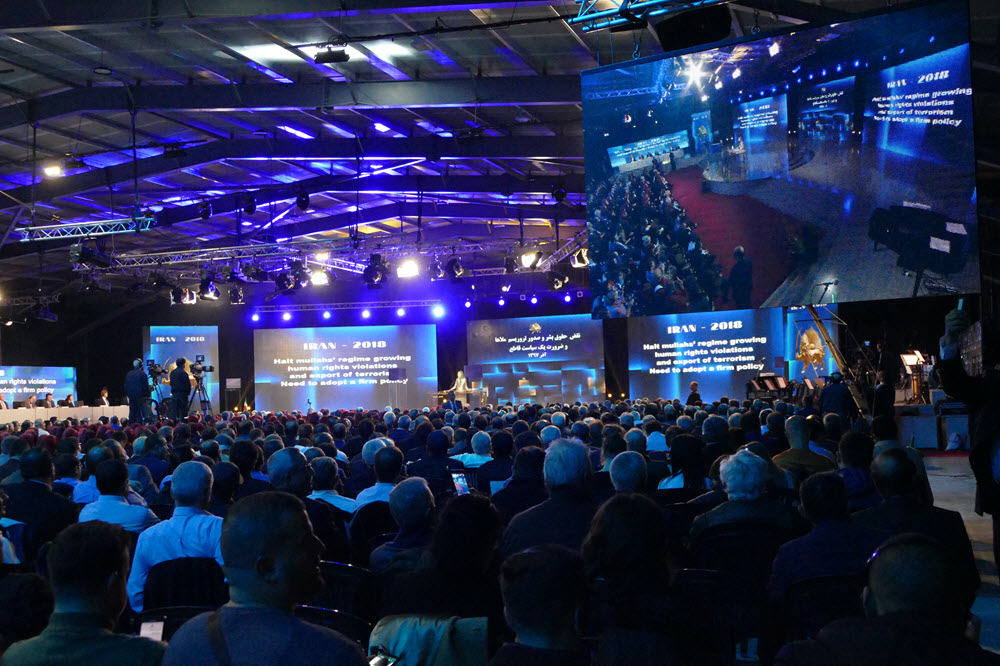 Expressing regret that the regime’s appeasers are still trying to find a way to deal with the clerical regime and aid the murderers of the Iranian people, Mrs. Rajavi added, “If you don’t want to stand by the people of Iran, at least do not victimize your own citizens’ security. Why do you aid a regime that poses threats to European capitals? This is our word: Respect the Iranian people’s desire to overthrow the regime and establish freedom and democracy. Let the hands of this criminal regime be cut off from Iran’s oil revenues which is our national asset. Every barrel of oil the regime sells, is a lash on the back of the people of Iran and a bullet piercing the heart of the people of the region. The regime’s successive missile tests aim at nothing but blackmailing and threatening regional and global peace.”

Speaking to the gathering of PMOI members in Ashraf 3 in Albania, Maryam Rajavi called for the adoption of a firm policy vis-à-vis the Iranian regime. In this speech which was being broadcast in the gatherings of Iranians in cities across the world, she stressed, “The IRGC, the MOIS, and the regime’s state propaganda machine must be placed on the U.S. List of Foreign Terrorist Organizations and the terror list of the European Union. The regime’s financial lifelines which fund Khamenei’s apparatus, the IRGC, and the terrorist Ouds Force must be blocked. And the dossier of the regime’s continuing crimes against humanity must be referred to the UN Security Council, and Khamenei, Rouhani and other regime leaders must face justice.”
Mrs. Rajavi noted the regime’s failure in quelling the uprisings and protests, restricting the activities of resistance units, plotting terrorist attacks against the Iranian Resistance, reining in its economic bankruptcy, and seeking collaboration of European governments as a way to get around the sanctions. She stressed, “The regime has no way out, and any solution it finds ends up firing back on them. The product of such a political impasse has been a dramatic fall in the regime’s political, economic, social and international status.”

Addressing the resistance units and youths in Iran, she said, “Today, the regime’s existence is more than ever in danger. Iran’s society is also more prepared than any other time and simmering. The establishment of a free Iran is on the shoulders of the Iranian people and Resistance. It is your willpower that is going to determine how the present volatile conditions will evolve into the overthrow of the mullahs’ dictatorship. The secret to victory is the united struggle of the people of Iran and the evolution of uprisings pioneered by resistance units and councils.” 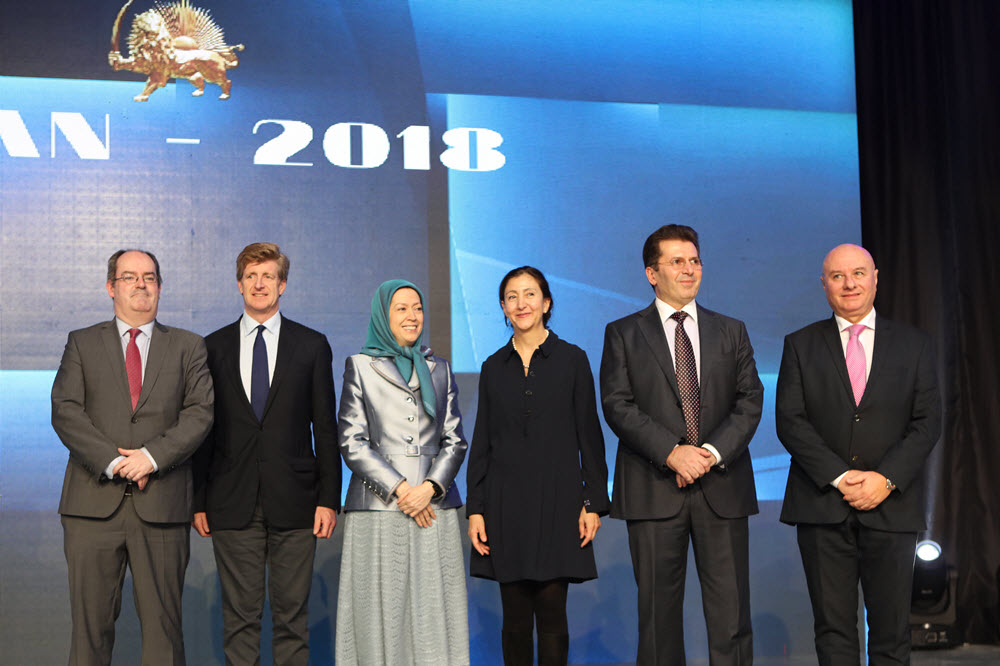 Mr. Patrick Kennedy said, “Contrary to the Iranian regime’s propaganda, both Democrats and Republicans in the US are united in supporting a firm policy on Iran and to stand with the Iranian people in their desire for change and to have a republic based on free election, separation of religion and state and gender equality. It is within this context that we support Maryam Rajavi and her ten-point declaration for a free Iran. The regime’s propaganda against the MEK, echoed sometimes in the Western media, is the best sign of regime’s fear of the MEK’s popularity in Iran and its role in the anti-regime protests. It is time for Europe to also stand up to regime’s growing terrorism in Europe and its malign activities in the region.”

Patrick Kennedy at the Int. Conf in :
The EU responded firmly by expelling the regime’s intel personnel and cutting off diplomatic relations.But today the response has been very week & inappropriate to the emerging threat. :
I think that things are changing and I’m very hopeful and very positive. We have many of our friends in today’s administration in the US. People are seeing what’s happening in Iran. pic.twitter.com/ikVWWtnePa

Dozens of representatives of more than 300 Iranian associations and communities in various countries spoke in this video conference which started at 3 p.m. local time in central Europe. They reiterated their support for the National Council of Resistance of Iran, the People’s Mojahedin Organization of Iran, and the Ten-Point Plan of the Iranian Resistance’s President-elect Maryam Rajavi. They said the only solution to the current crisis in Iran which has driven the entire region to the edge, is the overthrow of the clerical regime and the establishment of popular sovereignty and democracy.

Declaring their readiness for lending all-out support for the PMOI and the resistance units inside Iran in the final phase of the clerical regime’s rule, they said, “The Iranian Resistance led by Mr. Massoud Rajavi, enjoys a broad social base of support in Iran, has a strong organization, offers a clear platform and has adopted progressive and democratic plans for future Iran. It is able to bring about regime change and is capable of transferring the sovereignty to people. They have unique capacities and potentials for rebuilding the future Iran, offer social justice, and returning hope and trust to a nation which has suffered numerous treasons over the past 100 years and has been viciously suppressed and discriminated against under the dictatorships of the shahs and the mullahs.

The Iranian communities’ representatives reiterated, “It is because of these capacities that the clerical regime considers this Resistance as its only existential threat, and in addition to brutal suppression inside Iran it is resorting to terrorism and carrying out extensive demonization and misinformation campaigns against the Iranian Resistance to justify and prepare the grounds for domestic suppression and terrorism abroad.”
They added that in line with the uprisings in Iran and the overthrow of the regime, they see it as part of their duty to reveal the schemes and conspiracies of the Ministry of Intelligence, the terrorist Quds Force, and other agencies of the clerical regime against the only democratic alternative to the clerical regime in Iran.

Secretariat of the National Council of Resistance of Iran
December 15, 2018