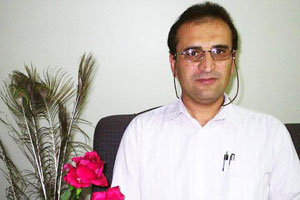 NCRI – The Iranian regime’s repressive State Security Forces (Police) disrupted a commemoration gathering and rally held by the residents of the Iranian village birthplace of the political prisoner Gholamreza Khossravi Savajani of the People’s Mojahedin Organization of Iran (PMOI /MEK) who was brutally hanged last Sunday in Gohardasht Prison.

Residents of Savadjan, in southern Iranian province of Chaharmahal and Bakhtiari first gathered outside a shrine and marched to the village’s mosque chanting slogans such as “precious PMOI member your martyrdom be blessed” and “Khossravi, Khossravi may your soul be happy”.

Gholamreza Khossravi Savadjani was born in Savadjan village and since his childhood lived in southern city of Abadan where he was acquainted with the PMOI and was actively involved in supporting the movement.

Gholamreza Khosravi was hanged in Karaj Gohardasht Prison on June 1, after 12 years of imprisonment and torture in various dungeons of the Iranian regime.
The mullahs’ intelligence elements refused to hand over his corpse to his family and secretly buried him on Monday, June 2, at 01:00 am in Bagh-e-Rezvan Cemetery in city of Isfahan.

Secretariat of the National Council of Resistance of Iran
June 3, 2014

Saeed Namaki, regime’s Health Minister: I was always worried about a frightening COVID-19 outbreak in the month of Esfand (the final month of...
Read more
Statements

Member of the regime’s parliamentary Health Commission: Ahvaz should be quarantined, and the government should be questioned why this city has not been...
Read more