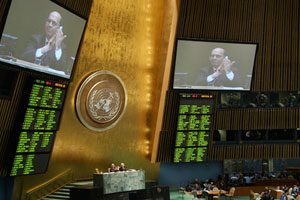 NCRI – The Iranian Resistance welcomes the enforcement of the Global Arms Trade Treaty, as a significant step towards global peace and security and calls on the state parties to immediately halt the transfer of arms and weapons parts and components to the mullahs ruling Iran and demands the cessation of the sale or transfer of arms to Iraq until the security of Iranian opposition members in Camp Liberty, as well as other innocent civilians, is guaranteed.

The United Nations Secretary General announced on December 24 the coming into force of The Global Arms Trade Treaty nearly two years, after it was adopted by the UN General Assembly.

The treaty stipulates that the transfer of all arms and ammunition is prohibited in case they would be used for ‘genocide, crimes against humanity, grave breaches of the Geneva Conventions of 1949, attacks directed against civilian objects or civilians protected as such, or other war crimes as defined by international agreements’.

The treaty emphasizes that the transferred arms should not endanger ‘peace and security’ or be in grave breach or facilitate the violation of International Humanitarian Law, International Human Rights Law, and international conventions or protocols relating to terrorism and ‘transnational organized crime’.

According to this treaty, the export of arms that would violate the obligations of a treaty State Party under measures adopted by the Security Council acting under Chapter VII of the Charter of the United Nations, in particular arms embargoes, is prohibited. In all of the above cases, the transfer of arms parts and components is also banned.

The arsenal of the clerical regime ruling Iran that is essentially filled by imports from other countries is totally employed in breach of the covenants and laws mentioned in this treaty and the export of any arms’ parts, big or small, heavy or light, to this regime violates the Arms Trade Treaty.

These arms are used for the massacre of the Iranian people, widespread arrests, suppression of popular demonstrations and protests, and collective executions, or are employed for crimes against humanity, war crimes, genocide, violation of international humanitarian and human rights laws inside Iran or in Syria, Iraq, Lebanon and Yemen. No wonder that neither the Iranian regime, nor the government of Iraq or the Assad regime joined this treaty.

Six ruthless massacres in Ashraf and Liberty, collective and arbitrary imprisonment of Iranian refugees, and a criminal siege on them, as well as the massacre of innocent Iraqi citizens in Iraq are all conducted by the arms sent to Iraq by states that are party to this treaty.

The Iranian Resistance calls on the state parties, especially the Western states, to refrain from transferring any arms to the Iranian regime and to make the sale of arms to Iraq conditional on them not being used in the massacre of the innocent, in particular the residents of Camp Liberty, and to secure and guarantee their security as protected persons under the Fourth Geneva Convention and as political refugees.

Previous articleIran: Execution and suppression continued in Christmas
Next articleIran: Smart filtering does not mean lifting ban on blocked websites