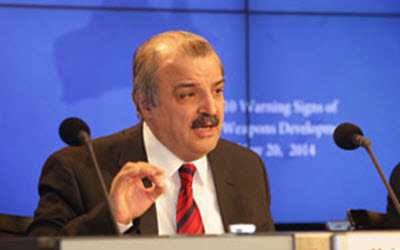 Position of Mr. Mohammad Mohaddessin, the Chair of the Foreign Affairs Committee of the National Council of Resistance of Iran (NCRI), on new sanctions imposed on the Iranian regime:

While welcoming the new sanctions,

The need for additional sanctions on the Revolutionary Guards and other entities involved in suppression, terrorism and fundamentalism must be recognized

Imposing sanctions against a number of individuals and companies affiliated with Iran’s clerical regime for their role in missile proliferation and terrorism is a positive step in confronting the illegitimate and terrorist dictatorship whose record includes 120,000 political executions.

But to effectively deal with the threats emanating from the godfather of state-sponsored terrorism and chief source of regional war and instability, which has played the key role in ISIS’s ascension to power and persistence, it is imperative that comprehensive sanctions be imposed on the Revolutionary Guards (IRGC), its affiliated entities, the Iranian Ministry of Intelligence, and other entities involved in suppression and export of terrorism.

The IRGC and its affiliated para-military forces and their commanders, including Qassem Soleimani and Iraj Masjedi (Iranian regime’s ambassador to Iraq), should be expelled from the countries of the region, in particular from Iraq, Syria, and Yemen. Otherwise, the region will not witness peace and tranquility.

It is noteworthy that yesterday, the President of the United States imposed new sanctions on 25 individuals and entities affiliated with the clerical regime for their role in missile proliferation and terrorism.

On Wednesday February 1, U.S. National Security Advisor Michael Flynn put the Iranian regime “on notice” over the regime’s recent ballistic missile test launch, calling it a “provocative” breach of a UN Security Council resolution. On Friday, Flynn announced in a statement that the U.S. was sanctioning 25 individuals and entities that provide support to the regime’s ballistic missile program and to the IRGC Quds Force:

Office of the Press Secretary

The Islamic Republic of Iran is the world’s leading state sponsor of terrorism and engages in and supports violent activities that destabilize the Middle East. This behavior seems continuous despite the very favorable deal given to Iran by the Obama Administration. These sanctions target these behaviors.

Iran’s senior leadership continues to threaten the United States and our allies. Since the Obama Administration agreed to the Joint Comprehensive Plan of Action with Iran in 2015, Iran’s belligerent and lawless behavior has only increased. Examples include the abduction of ten of our sailors and two patrol boats in January 2016, unwarranted harassment of vessel traffic and repeated weapons tests. Just this week, Iran tested a ballistic missile, and one of its proxy terrorist groups attacked a Saudi vessel in the Red Sea.

The international community has been too tolerant of Iran’s bad behavior. The ritual of convening a United Nations Security Council in an emergency meeting and issuing a strong statement is not enough.  The Trump Administration will no longer tolerate Iran’s provocations that threaten our interests.

The days of turning a blind eye to Iran’s hostile and belligerent actions toward the United States and the world community are over.

Previous articleUnemployment Crisis in Iran’s Economy
Next articleIran: Call to Stop Execution of a Juvenile