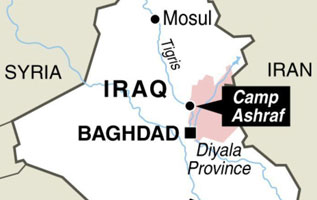 Reports received from inside the mullahs’ regime indicate that the plundering and stealing of PMOI (MEK) property in Ashraf that began on 12 September 2013, on the days following the transfer of the last group of Ashraf residents out of Ashraf, has taken on added dimensions in the last couple of week.

These reports indicate that on February 15, members of the Prime Ministry Committee tasked to suppress Camp Ashraf residents have gone to Ashraf and after breaking the locks on some of the warehouses and storage places stole much property in Ashraf, including cartons of shoes, socks, towels, gloves, etc.

On February 23, people from the prime ministry committee went to Ashraf warehouses and took with them large volumes of dishes and household items. During this same period, a number of brand new coolers that Government of Iraq (GoI) had opposed their transfer to Camp Liberty were also stolen from these same warehouses.

It is noteworthy that in the joint September 5 plan of UNAMI and the U.S. Embassy for the transfer of the last group of residents from Ashraf to Camp Liberty, it had been accentuated that “The GOI shall allow the residents to sell their property at any time… The GOI shall safeguard and guarantee all Ashraf property.”

Similarly, on September 6, Assistant Secretary of State for Near Eastern Affairs Ms. Beth Jones wrote in a letter to Mrs. Maryam Rajavi, President-elect of the Iranian Resistance: “The United Nations will help facilitate the safeguarding of the property at Ashraf through your retention of a trusted local security firm. The U.S. Embassy will do its utmost to support these efforts.”

Once again, the Iranian Resistance brings the attention of the U.S. government and the United Nations who have repeatedly and in writing committed themselves to the protection of residents’ property to the plunder and systematic destruction of this property by the Iraqi forces and calls on them to make possible the sale of the property by residents’ lawful representative Senator Robert Torricelli.

Secretariat of the National Council of Resistance of Iran
February 27, 2013