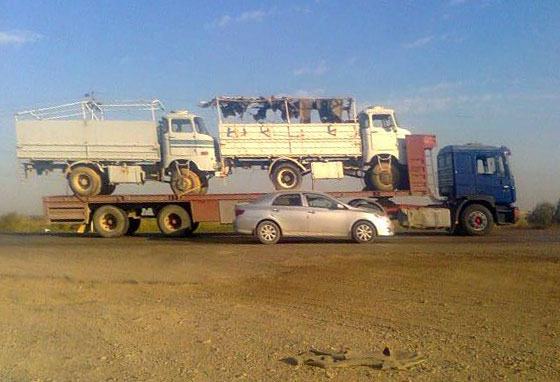 Iraqi agents used 50 flatbed trucks to carry out the stolen goods that include vehicles and loot from 10 large warehouses in recent weeks.

On September 5, 2013 a joint plan between UNAMI and the U.S. Embassy in Iraq for the evacuation of Camp Ashraf when the last group of residents left Ashraf based on this plan stipulates that the Government of Iraq “shall safeguard and guarantee all Ashraf property”.

NCRI – In July, Nouri al-Maliki handed over Camp Ashraf to the Commander of the terrorists Badr Organization Hadi al-Ameri to use the camp for assembling the terrorist militias affiliated with the Iranian regime.

Since then agents affiliated with the office Iraqi National Security Advisor Faleh al-Fayad, the Badr Organization and the Iraqi Intelligence officially responsible for safeguarding the properties began looting and stealing the belongings of Iranian dissidents that had remained in the camp based on a plan by the office of the United Nations Assistance Mission for Iraq (UNAMI).

In recent days the stealing and looting has taken a much larger scale.

The Secretariat of the National Council of Resistance of Iran, in a statement on 24 July 2014, announced that in the month of July, under the orders of Hadi al-Ameri, 400 Toyota Jeep Land cruisers Land cruisers in Camp Ashraf have been stolen to be used to reestablish the Badr Divisions.

Hadi al-Ameri who is the cousin of Faleh al-Fayad, has once again tasked his agents in Camp Ashraf in the recent weeks to steal more vehicles in order to fulfill the needs of the new units of the terrorist militias that have been formed by the order of Qasem Soleimani, Commander of the terrorist Qods Force.

In this respect, on October 31, a group from the National Security organ, together with a number of other elements, took advantage of Moharam and under the pretext of protecting the Abbasiya Holy Shrines went to Camp Ashraf with 50 flatbed trucks and loaded them with various vehicles, including Toyota Jeep Landcruisers, water tankers, loaders, and other construction vehicles.

On November 7, seven of these flatbed trucks that were carrying seven Jeep Land cruisers and seven water tankers were transferred to Baghdad.

On November 9, twenty-six flatbed trucks, each carrying two IFA trucks, left Camp Ashraf for Baghdad in a convoy. The terrorist Badr Organization elements protected and directed this convoy that was to be handed over to the terrorist militias.

On that same day, elements of the National Security organ and the Intelligence used seven other flatbed trucks to take 14 more vehicles out of Ashraf on the pretense that they want to take the vehicles to the Abbas Shrine in Karbala.

On November 10, eight vehicles belonging to residents of Camp Ashraf, including four Toyota Jeep Land cruisers and two Toyota Land cruisers that were loaded onto flatbed trucks and a truck towing another truck that had broken down, were stolen by the elements of the National Security and the Intelligence and transferred to Baghdad.

In addition to vehicles, concurrently these elements went to the location of large warehouses in Camp Ashraf and broke the locks on 10 of the 30 large warehouses and looted the property there. All of these warehouses had been locked and sealed in September 2013 in the presence of UN representatives before the last group of residents left Ashraf. Each of the warehouses has three locks with residents holding the key to one, UNAMI the other, and the Iraqi government the third.

In stealing the property in Camp Ashraf there is a great competition between various government organs and at times it leads to disputes between them.

On November 11, Colonel Khairi, who has been appointed to the management of the Police in al-Adhim Town by the criminal Commander of Diyala Police Major General Jamil, went to Camp Ashraf with some of his forces and loaded one forklift, two IFA trucks with compartments in the back, two Toyota Land cruisers, one loader, one gray Toyota Saloon passenger car, and one gray Toyota Avalon in an attempt to steal them.

This systematic thievery is taking place despite the September 5, 2013 joint plan of UNAMI and the U.S. Embassy for the evacuation of Ashraf when the last group of residents left Ashraf based on this plan. This joint plan stipulates: “The GOI shall allow the residents to sell their property at any time” and it “will review the inventory of the property with the residents in the presence of the UN” and “shall safeguard and guarantee all Ashraf property”.

Ms. Elizabeth Jones, the then-U.S. Assistant Secretary of State for Near Eastern Affairs, in a letter to Mrs. Maryam Rajavi on 6 September 2013, supported the above plan and wrote that if the residents accept this plan “The United Nations will help facilitate the safeguarding of the property at Ashraf through your retention of a trusted local security firm. The U.S. Embassy will do its utmost to support these efforts”. However, in practice, none of the promises were kept and the endeavors of the residents to hire private firms to protect the property in Ashraf proved unsuccessful.

In this period, residents have not been able to sell a single dollar of their property and over 75 Iraqi merchants who referred to Camp Liberty to sign contracts to purchase the property in Ashraf were not permitted to enter Camp Liberty and some of them were turned back after being insulted and battered. In all cases, the names and particulars of the merchants and their times of referral to Camp Liberty had been given in detail to Government of Iraq and UNAMI several days in advance and there had been no objections to their visits.

Once again, the Iranian Resistance brings the attention of the U.S. government, the United Nations, and in particular the UN Security Council session on Iraq on November 18, to the systematic and huge plunder of residents’ property in Ashraf which is in breach of all trilateral and quadripartite agreements between the residents, the Government of Iraq, the U.S. government, and the United Nations and calls for immediate action by the Security Council and the U.S. government to prevent the continuation of the plunder of this property, the return of the stolen property, and to make arrangements for the sale of residents’ property through their legal representative Senator Robert Torricelli.

Secretariat of the National Council of Resistance of Iran
November 15, 2014