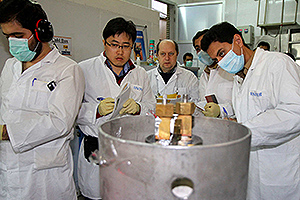 Call for all nuclear agreements and intrusive inspections of military and non-military sites to be made public
• The paragraphs of “Separate arrangement II” as disclosed by the Associated Press are a de facto agreement to forgo inspection of Parchin and award mullahs the opportunity to keep previous activities to acquire the bomb secret and to continue with those activities
• Inking the document by Hoseini Tash whose role in nuclear bomb-making was disclosed by the Iranian Resistance eleven years ago indicates the sensitive nature of Parchin. A close inspection of this site shall reveal many nuclear secrets of this regime

NCRI – The Associated Press report on the “Separate arrangement II agreed by the Islamic Republic of Iran and the International Atomic Energy Agency” clearly indicates that the Iranian regime is acutely fearful of revelations concerning its clandestine activities in Parchin aimed at acquisition of the nuclear bomb and that under no terms shall it allow inspection of this site through negotiations and dialogue.

The six paragraphs of this arrangement that is the outcome of several years of negotiations and dozens of meetings and prolonged discussions are a de facto agreement not to inspect Parchin that merely offers the regime the opportunity to keep its previous work in the acquisition of the nuclear bomb perpetually secret which in turn will keep open the path for secret work and deceptions aimed at bomb-making.

Inking of this agreement by IRGC Brigadier General Ali Hosseini Tash who in the past two decades has been one of the principal officials involved in the acquisition of the nuclear weapon in the Iranian regime and who is totally familiar with regime’s deceptions and clandestine work, indicates the great sensitivity of Parchin for the Iranian regime and leaves no place for second guessing that a thorough inspection of Parchin will reveal many secrets of the regime’s nuclear weapons project. When high explosive tests were conducted in the explosive chamber in Parchin, Hoseini Tash was one of the most senior officials directly involved in the bomb-making project of the regime.

This agreement and the fact that it is signed by Hoseini Tash indicate that the mullahs understand only firmness and that they shall use the negotiations and discussions, as in the past two decades, to mislead the international community and to continue their bomb-making project.

Keeping the nuclear agreements with this regime secret for whatever reason or justification merely allows the mullahs to further resort to deceit. Thus, the Iranian Resistance urges for all nuclear agreements between the international parties and the Iranian regime and the intrusive inspections of the military and non-military sites to be made public. This is the right of the Iranian people and an imperative for world peace and it is the least guarantee to bar acquisition of the nuclear bomb by a regime that has deceived the world for three decades. If the mullahs truly wanted verification of their nuclear program, they would not have objected to the disclosure of this arrangement.

IRGC Brigadier General Hoseini Tash who for years headed Defense Ministry’s research center and was involved in the nuclear weapons project, became Deputy Defense Minister from February 2004 to September 2005. During this period the “Center for that at the time was the bomb-making agency headed by Mohsen Fakhrizadeh, was under the direct supervision of Hoseini Tash.

During Ahmadinejad’s tenure, Ali Hoseini Tash was deputy to SNSC secretary on strategic affairs and a member of the nuclear negotiating team. During this period, he also headed the team that negotiated the nuclear issue with Russians. Subsequently, he was appointed head of Imam Hossein University where fundamental nuclear research is conducted. Again in 2013, Hoseini Tash was appointed Deputy to SNSC secretary on strategic affairs.

In April 2004, the Iranian Resistance disclosed the role of Hoseini Tash as the official responsible for the Education Research Institute (ERI), affiliated with the Ministry of Defense, and its subordinate SPND. Subsequently, in November 2004, the Iranian Resistance again revelaed: “Deputy Defense Minister Hoseini Tash pursues nuclear activities with Mohsen Fakhrizadeh and biological activities with Nader Maqsoudi.”

The Iranian Resistance disclosed in February 2005 that the production of Beryllium Oxide (that is necessary in conjunction with plutonium 210 as the detonator for the nuclear bomb) is being secretly followed by Dr. Nasser Ehsani, under the supervision of Hoseini Tash, at Malek Ashtar Industrial University that belongs to the Defense Ministry.

Parchin is one of the principal sites for the production of nuclear weapons components and where SPND was active under its previous moniker of “Center for New Defense Technology and Preparedness.” One of the directors of SPND is Saeid Borji who was the liaison for Danilenko, a Ukrainian scientist who built the explosive chamber in Parchin. For a long time Borji was the head of METFAZ (Center for Research and Development of Explosion and Shock Technology). He is deemed to have learned Danilenko’s experiences directly from him.

Secretariat of the National Council of Resistance of Iran
August 21, 2015

Iran: Intelligence Minister Make the Unprecedented Admission That the Regime Is After Building a Nuclear Bomb

Despite reaping the benefits of the nuclear deal, the regime never stopped its nuclear weapons project In an interview with the State Television, Mahmoud Alavi,...
Read more
Statements