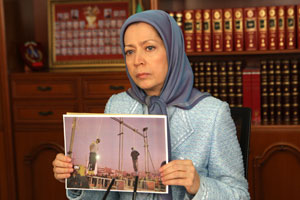 World Day against the Death Penalty

NCRI – In a message on the occasion of October 10, the World Day Against the Death Penalty, Mrs. Maryam Rajavi, President-elect of the Iranian Resistance, stated that the execution of over 1000 prisoners during Mullah Rouhani’s office that includes many political prisoners once again betrays the illusion of moderation in this regime together with those who appease it and makes all the more pressing the need to forward the file of barbaric and systematic violation of human rights in Iran to the United Nations Security Council and for leaders of the mullahs’ regime to face justice.

She stated that the religious dictatorship ruling Iran is a government of executions based on its history, ideology, laws and daily policies. Every eight hours it hangs at least one person and is unable to survive without these executions. This regime has employed the cruel punishment by death, especially in public, to create an atmosphere of terror and horror in order to rein in the flames of the wrath of a population that is fed up with oppression, inflation, poverty and unemployment.

The escalating trend of executions is directly linked to the crises-riddled state of this regime and the fact that in the past year the highest number of executions in the past quarter of a century have been carried out in Iran indicates the unprecedented feebleness of this regime against the resistance of an enraged people. The international community’s indifference in face of these crimes on the pretext of nuclear negotiations practically means getting along and encouraging the criminals ruling Iran to continue with these atrocities in Iran.

Mrs. Rajavi commended the demonstrations and protest movements by families of those executed, the prisoners, and the valiant youth against the execution of prisoners and called on the people to expand these protests. She added that the Iranian Resistance supports the annulment of the death penalty in Iran after the toppling of the mullahs and the establishment of a society based on human rights where torture and execution are a thing of the past.

During Rouhani’s tenure, over 1000 prisoners have been executed whilst the news on the execution of many prisoners never gets out. At least 27 women and 12 prisoners who were juveniles at the time of their arrest, together with 20 political prisoners, are amongst those executed with 57 of these executions carried out in public. During this period, a number of prisoners were killed under torture.

In addition to the execution of prisoners in the past year, assassination has been a method used to eliminate dissidents. Moreover, many have been shot by the repressive forces in various parts of the country and lost their lives. Heinous punishments such as cutting off hands, blinding, and cutting off ears have complemented the cycle of atrocities and horror in the mullahs’ regime.

The international community’s indifference and inaction in face of these atrocities by this medieval regime has resulted in the leaders of this regime blatantly boasting about these crimes. Mullah Rouhani describes execution as the “law of God” and the “law of the people” (Tasnim News Agency, affiliated with the terrorist Quds Force – April 19, 2014). And Javad Larijani, chair of the so-called human rights section of mullahs’ judiciary, says: “We are not ashamed of stoning or any other Islamic decrees… no one has the right to tell a judge to avoid handing down certain verdicts since it would annoy the United Nations.” (April 10, 2014) Likewise, he calls “firmness” in “executions” as a “great service to humanity” and a source of “life” and says: “This matter is a reason for our judicial system and our security organs to be proud. We expect the international institutions and the world to be grateful for this great service to humanity.”

This same criminal heinously described the latest report by Dr. Ahmed Shaheed, the Special Rapporteur on the situation of human rights in Iran, as endorsing terrorism and terrorists and said: “His defense of terrorism is prosecutable and we cannot easily leave this matter be. He has declared all those individuals arrested or punished in Iran on the charge of terrorism as defenders of human rights. This may be legally prosecuted. According to the United Nations regulations, no institution may defend terrorism.” (State TV – October 8)

Secretariat of the National Council of Resistance of Iran
October 10, 2014